Toshiba Tegra 2-powered Android 3.0 Tablet coming in spring but how much will it cost? 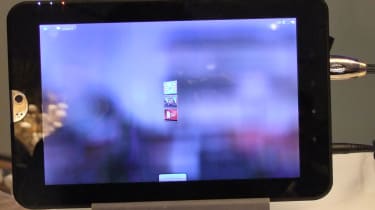 Toshiba showed off its upcoming Android 3.0 tablet in London and we managed to get a hands-on preview of the imaginatively named Tablet.

Disappointingly however, the pre-production model we saw wasn't actually running the as-yet unreleased Android 3.0 Honeycomb operating system, but was running Android 2.2 instead. Nonetheless we got a good feel of the hardware itself.

The touchscreen felt a little laggy, but this may be due to the use of Android 2.2 and not the tablet-optimised 3.0 Honeycomb. The lack of an internet connection meant we couldn't try the web browser, or any other demanding apps, so we couldn't get a feel for the speed of the dual-core Nvidia Tegra 2 processor.

A full-size USB port means that flash drives and keyboards should work with the Tablet. This feature alone sets it apart from both the iPad and other Android 3.0 tablets. There's also a SD card slot for adding more storage and for downloading photos from a camera.

Two versions will be available one with just WiFi and another with both WiFi and 3G. According to Toshiba spokesman Graeme Simons the 3G-capable version will be available roughly two to six weeks after the arrival of the WiFi-only model.

The 10.1in touchscreen is bright with broad viewing angles. Although we couldn't try it out for long enough to judge if the screen is as good looking as the iPad's, it does have a 1,280x800 pixel resolution which is higher than the iPad's 1,024x768 so it should be better suited for working on documents and watching 720p HD videos.

According to Simons, the Tablet uses Resolution Plus technology derived from the company's range of TVs to upscale standard definition videos so they look better when viewed on high definition screens connected to its standard HDMI port. The Ambient Screen Control technology uses the webcam to detect how bright your surroundings are and adjusts the screen's brightness automatically, although we're surprised Toshiba isn't using an ambient light sensor as Apple does in the iPad.

We were a little disappointed by the build quality of the Tablet. The plastic chassis flexed quite easily when placed under pressure, although the ribbed back does make it easy to grip. Hopefully, final versions of the Tablet will feel sturdier.

Toshiba has yet to commit to pricing, but it will probably cost more than the older Folio 100 tablet which is currently listed at 370 online. Toshiba was also unable to commit on a specific release date, but the Tablet should arrive sometime this spring. We'll bring you a full review as soon as we can.

Toshiba's Android 3.0 Tablet could be a winner, but it will have to stand out from the oncoming hoard of similarly specified Android 3.0 tablets.