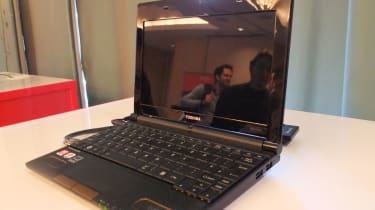 Toshiba has unveiled the NB550D, one of the first computers equipped with AMD's latest dual-core AMD Fusion processors.

Unlike Toshiba's previous netbooks which came equipped with Intel Atom processors, the NB550D comes with a dual core 1GHz AMD C50 processor. It should not only be faster and more energy efficient than AMD's previous netbook chips, it also has an integrated HD 6250 graphics processor that should be capable of playing high definition video.

However, although the NB550D has a standard HDMI port for connecting a HD TV, unusual for a netbook, it still comes with Windows 7 Starter. That version of Windows artificially limits the resolution of external monitors connected via VGA to 1,440x1,050 pixels, no matter its actual resolution. It's not clear if the NB550D overcomes this limitation thanks to its HDMI port.

Otherwise, the NB550D is very similar to current Toshiba netbooks. We got our hands on a sample unit at Toshiba's London launch event. As expected for a netbook, the 10.1in screen has a resolution of 1,024x600 pixels. We were impressed by the sturdiness of the chassis. The keyboard remains unchanged from previous Toshiba netbooks as far as we can tell some punctuation keys are undersized, but it otherwise feels reasonably large and responsive to type on.

It also has the same set of Harmon Kardon stereo speakers as Toshiba's latest Atom-powered netbooks, which sound remarkably good for such a small laptop. The dimpled, rubberised lid will be available in either blue or brown, although whether it looks good or not is a matter of taste.

Toshiba claims battery life of up to nine and a half hours. The C50 processor has a TDP of just 9W, while the battery has six cells, so this figure seems plausible. The NB550D will be available in the next few weeks for around 233 ex VAT.