With the launch reportedly only weeks away, we get some hands on time with RIM’s first tablet. 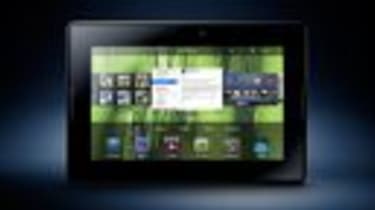 Research in Motion (RIM) has long been the choice for corporate users when it comes to smartphones thanks to the features of its BlackBerry handsets.

However, as Apple and Google continue to encroach on its lead, RIM is taking on their territory with the launch of its first tablet, the BlackBerry PlayBook.

A seven inch screen, 1024 x 600 resolution, a touch sensitive bezel and two cameras one rear facing, one front facing make the device appealing but it is the handset tie-up that makes the PlayBook stand out.

Users can link their BlackBerry smartphone to the device to share contacts and documents between the two. However, when the link is broken, the tablet wipes the data, adding much needed security to the often compromised business network.

But can it compete aesthetically as well? We got some hands on time with the PlayBook at Mobile World Congress so take a look at our video below to find out.