A Windows Phone 7 handset with a slide-out hardware keyboard. Is this smartphone heaven for business users? Chris Finnamore flexes his fingers and finds out. 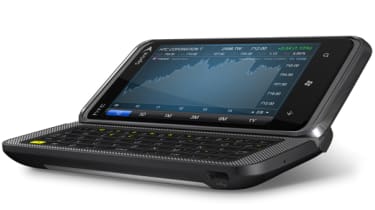 The last Windows Phone 7 handset we looked at - HTC's HD7 - was billed as an entertainment phone, with a huge 4.3in screen and 16GB of storage for your movies.

HTC's 7 Pro is more of a throwback to a time when Microsoft's mobile operating system was all about work rather than films, music and social networking. Despite its smaller 3.6in screen, it's 23 grammes heavier than the HD7, thanks to the addition of that darling of any travelling businessman - a slide-out QWERTY keyboard.

This slides out from the left side of the phone, and getting the action right is tricky. The phone's shiny silver bezel is tricky to grip as you push the screen sideways, and at first we kept nearly dropping the phone. Things improved with time, though. It's all in the wrist. The slide action itself is fairly rough as the screen slides over the matte keyboard surround, so it's not nearly as easy to use as sliding keyboard triumphs such as Nokia's N97 - despite that phone being blighted by a horrid and unstable operating system.

The screen flips up at an angle when fully extended, so the 7 Pro looks like a mini laptop when you're using the hardware QWERTY keyboard. It's especially comfortable to use when typing emails or editing documents. The keys are large and have plenty of travel, and the dedicated number row is welcome.

There are a couple of strange choices - an entire key is dedicated to smileys, and pressing it brings up every punctuation-expressed emotion you could imagine. Meanwhile, the @ key is relegated to a FN-2 key combination. We appreciate the need to express how you're feeling succinctly on Twitter, but whether we're sending emails or replying to tweets, we find the @ key usually more useful than emoticons. It's also quite a stretch to reach the small mid-mounted space bar in the middle of the keyboard with your thumbs.