An Android 2.3 smartphone with a physical keyboard and proper video-out support - could the Xperia Pro be the business smartphone of 2011? 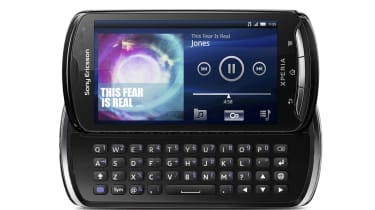 Following our sneak peek video of the new Sony Ericsson Xperia Pro smartphone at Mobile World Congress in Barcelona, we managed to get a lengthier preview of the Android business handset in London.

Despite having a slide-out physical keyboard, the Xperia Pro doesn't feel much thicker or heavier than other Android phones. The plastic build felt a bit flimsy, but we'd put that down to the pre-production nature of the particular phone we were using. The slide-out mechanism itself feels better-designed as well as less fussy than the slide-out keyboards on HTC Android and Windows Phone 7 handsets we've seen.

The keyboard itself had a remarkable amount of travel for a smartphone keyboard. If you're used to a numeric keypad or touchscreen keyboard, then using the Xperia Pro's keyboard will take getting used to. We couldn't use it for long enough to get a good feel for how quickly and accurately we could type on it, but the rubbery keys do feel big enough although we kept hitting the return key when we were actually aiming for the backspace key.

The 3.7in screen has a resolution of 854x480 pixels and looks bright too. There's a micro HDMI port so you can connect the phone to a high definition TV, projector or monitor. Unlike other smartphones we've seen, this video output features works with any app, including the web browser and the preinstalled Office Suite Pro app. It could therefore be used in place of a laptop to give presentations or even as cheap and cheerful digital signage.

Android 2.3 is preinstalled, but Sony Ericsson has also overlaid its own Timescape user interface on top. We have mixed feelings about these interfaces, but Sony Ericsson has included a couple of useful extra features in its latest version of Timescape. The app drawer can be sorted, showing your most frequently used apps or recently installed apps for example, which app hoarders will appreciate. Using the standard pinch-to-zoom out gesture on the home screen shows you a MacOS X Expose-style overview of all your home screen widgets.

Sony Ericsson claims its Exmor R technology enables the 8.1 megapixel camera to take better quality photos in dimly lit conditions that would outfox lesser smartphone cameras. In our brief tests, although the Xperia Pro's camera did indeed produce sharper, more evenly lit pictures than an iPhone 4, images still looked very grainy which tends to be a problem for smartphone cameras in dark environments.

Find the best mobile phones at www.phones4u.co.uk. They have all of the most popular handsets available on their website.

A hardware keyboard and video-out capabilities that work with any app make the Xperia Pro one of the smartphones to look forward to in 2011.