Does HP have the ability to make its mark in the tablet wars with this webOS-based device? We have a closer look to see if it will suit business users. 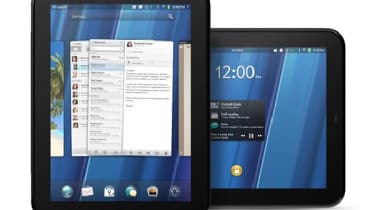 Fighting through all the tablets on the market has just gotten harder following Mobile World Congress 2011 (MWC) in Barcelona.

The place was flooded with new designs in various shapes and sizes, trying to steal even a slither of market share from the dominant Apple iPad.

However, HP decided to leap ahead of the game by launching its new tablet, the HP TouchPad, the week before the conference. After much anticipation, we finally managed to get our hands on one at MWC.

At first glance, the TouchPad is a shiny and sleek-looking device. With its smooth, rounded corners and gorilla glass front, it definitely compares well with other tablets aesthetically.

It was also a little thicker than some of its rivals too at 13.7mm, but this wasn't hugely noticeable and didn't affect the pleasing appearance of the tablet. Its dimensions are almost identical to the iPad's.

The 1,024 x 768 resolution of the 9.7in screen beats many of its competitors, but it also outweighs many of them as well at a hefty 740g. Although still lighter than the average notebook, it is off-putting. As one of the heaviest of 2011's upcoming tablets, it can be uncomfortable to hold for long periods of time.

The TouchPad runs the latest version of webOS and HP should be patting itself on the back after acquiring Palm. HP has adapted webOS for a tablet incredibly well the interface felt very smooth whether we were flipping through home screens, browsing the web or running applications.

Five of your favourite applications are stored in a dock that sits at the bottom of the screen. If you want to close an open app, simply flick your finger upwards to push it away. Although this feature has been present in webOS since the very first version, it remains one of our favourite features.