Is the new Vaio S the best-looking Sandy Bridge laptop yet? 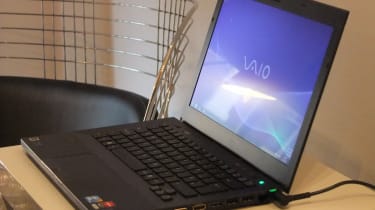 Sony has revamped its S-series Vaio business laptop. Sony could have played it safe and simply added a Sandy Bridge Intel processor, but the Japanese colossus has been a bit bolder and unveiled a completely new design.

The last S-series Vaio we saw was a fine laptop, but the plastic chassis felt a little cheap and was a tad heavy at 2kg. The new SB1V9 weighs just under 1.8kg and feels much sturdier, yet still manages to look sleek and attractive. The low weight is all the more impressive as Sony still managed to squeeze in a DVD writer. Although we only had a chance to try out a pre-production unit for a few minutes we were nonetheless impressed by the large, responsive backlit keyboard and the huge touchpad.

The top of the range SB1V9 model will come equipped with 4GB of RAM, a 500GB hard disk, a 2.5GHz Core i5 2520m processor and an integrated 3G modem. This model will come in black and cost around 800 ex VAT. There are two graphics chips - an integrated Intel chip and a more powerful, but also more power-hungry Radeon dedicated chip. A switch on the keyboard allows you to flip between the two. A slightly cheaper silver model will be available without built-in 3G and slightly lower specifications.

Both models will also have a USB3 port, a fingerprint reader and a 13.3in screen with a resolution of 1,366x768 pixels. Customers should also be able to customize both models to their specifications when ordering from the sony.co.uk website with options such as a Blu-ray drive, a SSD and different lid finishes. Both models should be available by the end of March.

The new Vaio S series laptops are easily the most promising of the upcoming Sandy Bridge-equipped laptops that we've seen so far. We look forward to bringing you a full review as soon as we can.