Dell’s new PowerEdge R515 is the first Opteron 4100 powered rack server to market. It has impressive storage credentials and a comparatively low price. In this exclusive review we find out whether it’s a Xeon beater. 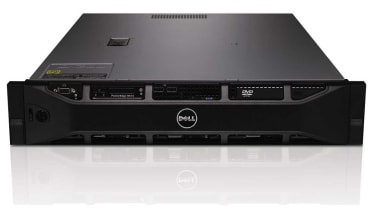 Dell already has the largest range of AMD equipped servers of all the blue chips and the latest PowerEdge R515 widens the gap even more as it's the first rack system to market with the lateest Opteron 4100 processors. It targets SMBs on a tight budget looking to replace their worn out legacy servers, but also has a sharp focus on applications requiring a lot of local storage.

Compared with the 5500 and 5600 Xeons and their disparate specifications, the Opteron 4100-series is simpler. They all have 6MB of L3 cache, support for 1,333MHz DDR3 memory and a HyperTransport speed of 6.4GT/sec. Your main decisions are therefore about the clock speed, power consumption and whether you want four or six cores. There are four chips with a TDP of 75W, three HE models with a TDP of 50W and a pair of ultra low-power 32W EE models. The R515 on review includes a pair of 2.1GHz 4170 HE processors which is the entry-level six-core 50W model.

AMD claims of low power consumption were confirmed in our lab tests. With the server fitted with both 750W hot-plug supplies and Windows Server 2008 R2 running in idle, we recorded the system drawing 124W. With SiSoft Sandra pushing all twelve cores to near maximum utilisation, this peaked at only 215W.

To put this in perspective we compared it against a Dell PowerEdge R710 with dual 2.26GHz E5520 Xeons, 12GB of DDR3 RAM, four 146GB SFF disks and pair of 570W power supplies. In idle we clocked power consumption at 150W and peaking under full load at 270W. The Opteron-equipped R515 is clearly more power efficient than an otherwise similarly-specified Xeon-equipped R710.