We bring you all the news as it happens from the launch of Apple's iPad 2. 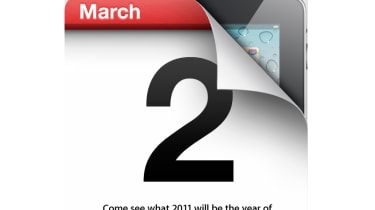 Make sure you refresh so you get all the latest news

So, we've got a thinner, lighter and faster iPad with some cameras, as well as iOS 4.3 with some new apps.

The iPad 2 looks like a fine piece of work, but some may not be as blown away as Steve Jobs appeared to be. And there may even be another iteration of the iPad in the coming months.

No doubt there will be some heated debate about whether the device will be a game changer as Apple says it is.

Nevertheless, I'm sure everyone can agree it was great to see Jobs looking good.

Anyway - thanks for tuning in and share your iPad 2 reactions with us over the coming days, weeks and months.

19:15 Jobs has thanked plenty of people, including the creators, as well as families and friends.

19:13 Jobs says these post-PC devices need to be easier to use and more intuitive than PCs today. Hints other manufacturers are thinking about things in the wrong way - i.e. the non-Apple way.

19:08 Jonathan Ive featuring in the wrapping up video. Is he really leaving? Doesn't look so likely now.

Is there something more coming?

19:05 Our reviews chief Alan is wondering: Will Apple eat increased VAT on iPad 2 UK pricing or pass it on to the UK purchaser?

Steve Jobs is "blown away" by the stuff coming out.

18:57 Lots of neat stuff for GarageBand - pressure sensitivity drums and pianos in particular. Good out of hours stuff to leave the working day behind you.

18:54 GarageBand on iPad has over 250 loops to play around with, loads of touch instruments and is compatible with the Mac version.

18:50 GarageBand on the iPad - will be music to the ears (LOL) of both songwriters and podcasters alike. Happy about this.

18:47 iMovie for iPad has precision editing for fine grained video editing too.

Just to clear up I said the device was 2.33 per cent thinner earlier - meant 33 per cent! No biggie. Sorry Steve...

iMovie for iPad features multi-tracking audio recording and will allow users to upload content to video sharing sites in HD. Works on iPhone as well.

18:40 You'll be able to use FaceTime between various Apple devices. Demo time!

18:39 Ooh Photo Booth on iPad so you can make your face look silly. Not massively important.

The addition of FaceTime video conferencing is, however, a little more important, especially for us business users.

18:37 iOS 4.3 allows iPad switch to be used for mute or rotation lock. Unlike the mute only option now.

18:35 So with iOS 4.3 we've got some improved Safari performance, with JavaScript twice as fast. Scott Forestall, Apple VP talking us through it all.

18:32 These Smart Covers look awesome - they're apparently made of the same stuff as spacesuits and it cleans the screen every time you close it.

18:30 Now we've got Smart Covers - flexible screen covers rather than full case - doesn't add weight or bulk like other cases. iPad 2 smart covers auto wakes and sleeps iPad as it is removed.

18:28 Some cool features - HDMI video out, through a dock accessory cable and this will work with all apps. You can charge the iPad whilst watching stuff on the telly.

18:24 Same battery life and same pricing in the US. Good to hear.

18:23 The iPad 2 is actually thinner than the iPhone 4 and weighs in at 0.2 pounds lighter than the original. Oh and it comes in black and white. Sexy stuff.

White one will ship from day one as well.

18:20 So we've got an all new design, dual-core A5 chip, up to 2x faster CPU, graphics supposed to be nine times better as well as front and rear cameras.

It's 33 per cent thinner than the original as well. Looks like our predictions are coming true then.

18:19 Return of the Jobs - he's hinting other tablets have been copycats. And now it's time to hear about the iPad 2 - it's been confirmed. No surprise there then.

18:17 Ooh a little bit of Marc Benioff love. I was at Salesforce's Dreamforce event last year where he had an iPad hidden down his trousers for the first half of a keynote. Nice.

18:14 Talk about the iPad being a post-PC device - Apple trying to redefine the entire industry yet again then.

18:12 Jobs has a little dig at Samsung before moving onto a video about why 2010 was the year of the iPad. Ooh shiny stuff time...

18:11 There are now around 65,000 iPad specific apps as well and competitors have been flummoxed at the device's success, Jobs adds.

18:08 Jobs saying people laughed at Apple when iPad came out, but it's turned out to be magical.

18:06 Looks like we've got an iBooks update first - Random House to bring 17,000 ebooks to the platform. Good news for bookworms out there like myself.

18:03 Steve Jobs on stage at the San Francisco event. Plenty of applause and cheers going around. Great stuff.

18:01 Potential Jobs successor Jonny Ive has been spotted in the front row in San Francisco. Interesting.

17:57 Minutes away now... is it going to be worth the buzz? Usually Apple don't disappoint but this could easily be different given the iPad 3 rumours.

17:48 Apple will want to really impress tonight, especially considering the competition it faces in the tablet market this year from the likes of Samsung, Motorola, HP, HTC and RIM.

Here's what Ovum analyst Adam Leach had to say earlier: "Devices based on Google's platforms will only overtake those based on Apple's platformby 2015, when we forecast 36 per cent and 35 per cent market shares respectively, of a total market with shipments of approximately 150 million units in 2015."

17:40 We could also be set to see plenty of other Apple news this evening. Rumours about iOS 5 have been bouncing about and some stuff on Apple TV could appear.

17:36 There have been plenty of suggestions this will just be a refresh of the original iPad and that the iPad 3 will be released in the not too distant future.

17:34 So, what to expect? Most likely a camera, a slimmer design, some extra power, a retina display like the iPhone 4, more memory, USB connectivity? Who knows... all just rumours for now.

17:32 As an iPad owner myself I'm a little excited about this... although a bit depressed that my device is now out of date. Just the way Apple rolls now though.

17:30 There's been plenty of buzz around what to expect and rumours Steve Jobs will make an appearance. Nothing from Apple directly, of course.

17:28 Hello everyone. Staff Writer Tom Brewster here to bring you all the news from tonight's special Apple event (i.e. the introduction of the iPad 2) as it happens.