Fujitsu claims its new Primergy MX130 S1 is a microserver aimed at small businesses, but we think it’s just a PC in a thinly-veiled disguise. Read this review to find out why. 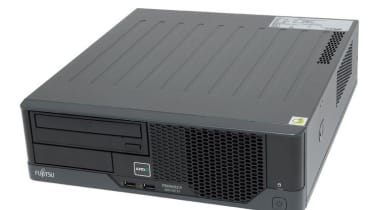 The latest microservers are aimed squarely at small business that have traditionally relied on a PC for providing simple file and print services. HP was first out of the blocks with its compact MicroServer N36L and now Fujitsu has introduced its Primergy MX130 S1.

The MX130 targets small businesses of up to 15 users that want a central location for basic file sharing and print services. Along with Windows Server 2008 R2, the server is also validated for Red Hat Enterprise Linux. We can't see many small businesses wanting to tussle with the latter though as it's far too complicated.

Windows Server 2008 R2 Foundation can be preinstalled for 145 which is good value. Fujitsu advised us it also plans to offer SBS Essentials 2011 on this server when Microsoft launches it later this year.

The system on review looks pricey when compared to the HP MicroServer. However, the Primergy's 3.1GHz AMD Athlon II X2 255 is a lot faster than the little 1.3GHz Athlon II Neo in the MicroServer, although you can save cash by opting for an Athlon 220 or a single-core Sempron processor.

The price for the review system also includes two 1TB SATA hard disks. We shopped around and found an Athlon 220 model with 2GB of RAM and a pair of 250GB drives on EBuyer for around 250 ex VAT which puts it closer in price to the MicroServer.

Rather than design a completely new chassis for the MX130 S1, Fujitsu has simply used its standard Esprimo desktop casing. Physically, it's little different from the Esprimo E5645 that failed to impress us when we recently reviewed it.

However, a big bonus of this chassis is it's designed to be very quiet and we can say it's almost silent. The cooling arrangement is a little strange, though, as the chassis has a fan mounted at the front, but the processor heatsink is barely an inch behind it and is also fitted with its own fan.