The latest 17in MacBook Pro is Apple's most powerful laptop yet thanks to its quad-core Sandy Bridge processor and new Thunderbolt port. But are these enough to justify its high price? 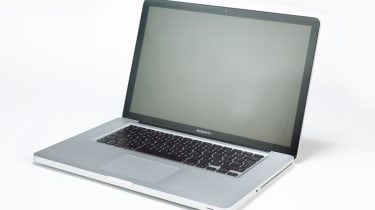 As with the other MacBook Pros, the 17in model feels rugged but still looks sleek thanks to its sturdy, slender aluminium construction. One design element we're big fans of is the MagSafe connector for the power supply. Since it connects magnetically, if someone trips over the cable then it falls away harmlessly instead of dragging the laptop to the floor or wrenching itself out of the socket, potentially damaging it.

There aren't any specialised security features, such as a fingerprint reader or smartcard slot, although that's no surprise since Apple has eschewed such features in the past. The one year warranty is also a little short. Although the warranty can be extended for an additional two years for 228 ex VAT, a longer base warranty would be preferred.

There's no Blu-ray writer built-in, even as an optional extra, which may disappoint if you want to author Blu-ray movies on the go or want to backup large quantities of data onto a single disc. There aren't any complaints about the large 750GB hard disk though. This can be substituted by Apple with a SSD up to 512GB in capacity, although this will be costly.

The 17in MacBook Pro is a powerful desktop replacement laptop that's also equipped with a great screen, long battery life, several useful design touches as well as a comfortable keyboard and touch pad too. It's expensive though and the lack of Blu-ray and security features will put off some. It's a niche laptop, but at least it's a good niche laptop.