iPass' latest research suggests tablets are the device of choice for one in five mobile workers. ITPRO asked CEO Evan Kaplan what he thinks is driving enterprise interest, and who is winning the smartphone OS wars. 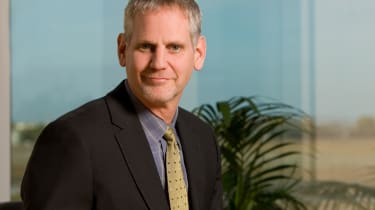 The tablet's popularity as a consumer device is not in doubt, but when the iPad launched last year, many CIOs remained sceptical about media tablets' value in business.

But this has not stopped business users adopting the devices, and in large numbers. According to iPass, which carries out quarterly surveys of mobile workers in the enterprise, the tablet has come from nowhere to being the device of choice for 20 per cent of respondents. And this has taken place in just a year. ITPRO spoke to iPass' CEO Evan Kaplan about the latest survey results, the trend in mobile devices for business, and the impact that usage is having on companies' data costs.

Your survey has seen business use of tablets rise significantly. Does that surprise you?

I'm always surprised by the data that comes back. Some of it is just plain interesting. Twenty per cent of workers selected the tablet as their device of choice and we'd certainly not have seen that a year ago. And 49 per cent selected the smartphone, which is down from 63 per cent in 2010. What that tells us is the pad is quickly inserting itself into the "stack" of valid, enterprise devices along with the smartphone and laptop.

Are we seeing the uptake in tablets being driven by a desire from the mobile workforce to have a better device for entertainment purposes rather than by business applications?

There are some people using tablets for entertainment, because it is a cross-over device. But here is the fundamental dynamic: devices are getting cheaper and cheaper. And we expect them to get cheaper still. As they become more consumer [focused] they become more fashion-oriented, they become trendy almost. But networks are expensive.

So as long as networks are expensive and devices are cheap, expect people to have lots of devices to do lots of different things. On the enterprise side, the truth is you check your email pretty constantly. What do I use my iPad for? I use it to check my email, to view PowerPoints. I use it as a viewing device, as a reader for PDFs and documents. It is a much better reader than my smartphone and I don't have to open my laptop. But I move pretty seamlessly between all three devices. Increasingly, for the enterprise, you are looking to provision applications that work seamlessly across all three platforms.

If you use something like Evernote, for example, to take notes, you take them locally, they are stored in the cloud and you pull them down on whichever device you happen to be on. And each device takes advantage of its capabilities to best view it.

We are seeing new types of devices that allow people to do great things from a business point of view, with applications such as Evernote or collaboration apps that can make use of a bigger screen. But how do businesses manage that trend, when you give someone a device that is also very good at, say, watching movies? That is going to really hurt your budget.

I think enterprises are increasingly looking for platforms that give them the data visibility on any company-liable device. They can see what kind of data they are using and how much. As an IT guy you don't really care about someone using free WiFi at home.

You care about network usage and that is where enterprises are looking at tools and we are one of those tools that give the business a global view of a person's usage across all three devices. How much data are they using on a pad, a smartphone and a laptop? Over time you develop visibility but it is a learning curve, and IT is still very early on that learning curve.

But employees do get it. Of those mobile workers, 94 per cent troubleshoot their own devices. They also get the expense of cellular data networks. In Europe they get it even more because they are crossing borders so easily. So they search out WiFi and make sure they know which network they are on. They are less likely to download movies on expensive cellular networks.

But how do you keep up with the increasingly diverse nature of devices? Do you have to write software to make the wireless experience slick enough that people use the WiFi option? Every time a new device comes out there's a chance that it breaks that functionality.

It is a fundamental shift. We can't come to the world of Windows versions where there is an upgrade every three to four years with only bug fixes in between. It's become a core competence for developers to develop for these platforms at an aggressive rate.

Consumerisation is a fact, it is now part of the enterprise world. But we do now have Android and iOS, where not a tremendous amount breaks between releases. The Mac is a known, Windows is a known, you hope you won't have to develop for the enterprise on every single OS. I suspect there will be a weaning out. Right now, Android and iOS are the key mobile platforms, although we are watching Windows Phone 7 closely, which should in theory be tied to the enterprise.

At the moment it does not have many enterprise features, but over time we do think Microsoft will be successful in the enterprise.