The exciting Thunderbolt port isn't the only remarkable thing about Apple's latest 13in MacBook Pro laptop. Read on to find why we think it's a great computer in almost every way. 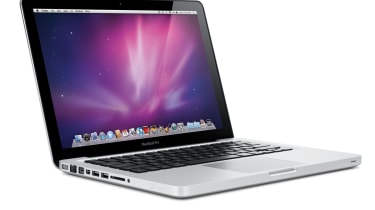 Like the other new MacBook Pros, the 13in model has a Thunderbolt port. Thunderbolt is a new connector technology from Intel and we've been greatly impressed by its speed and versatility. It has great potential and we've already examined Thunderbolt in greater detail. Thunderbolt peripherals aren't available yet, but the technology has great promise and the port is backwards compatible with Mini DisplayPort monitors, as well as monitors and projectors with other types of connectors using the appropriate adapters.

Unlike other forthcoming Sandy Bridge laptops, the MacBook Pro doesn't have any USB3 ports. There isn't built-in 3G either, nor is there an ExpressCard slot for adding these capabilities later. There is a FireWire 800 socket and two USB2 connectors though. The memory card slot only accepts SD cards, including the new larger capacity SDXC cards.

The glossy 13.3in screen has the same 1,280x800 pixel resolution as previous 13in MacBook Pros and it's the same resolution found on the white MacBook. This is surprising since the 13in MacBook Air now has a higher resolution 1,440x900 screen which we would like to have seen here.

Unlike the larger 15in and 17in models you can't order a screen with a matt finish instead of the standard glossy finish. This is disappointing since the glare caused by overhead lights reflecting off the glossy sheen can be quite distracting, although this is usually easily remedied by adjusting the screen's angle or your seating position. The screen itself is very bright, albeit not as bright as its larger counterparts, and has wide viewing angles too so colours looked consistently accurate in our tests.