Synology’s new RackStation RS411 is one of the lowest cost rack mounted NAS appliances on the market. It’s fast and feature packed, but there are some limitations so read this review to find out more. 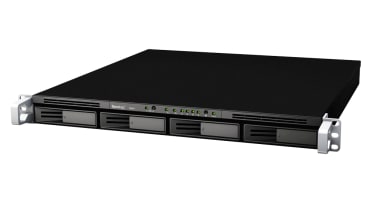 To test performance we called up a Broadberry rack server equipped with dual Intel X5560 Xeons, 12GB of DDR3 memory and running Windows Server 2008 R2 Enterprise. With a share mapped to the server we saw Iometer report a raw read throughput of 106MB/s agreeing closely with Synology's claims.

Real world performance was good with drag and drop copies of a 2.52GB .AVI video clip seeing read and write speeds of 83MB/sec and 40MB/sec. Using the FileZilla FTP client with the same file saw average download and upload speeds of 99MB/sec and 42MB/sec.

The appliance didn't cope so well with smaller files. Drag and drop copies with a 17.4GB folder containing 10,500 files returned much lower read and write speeds of 41MB/sec and 31MB/sec.

The RS411 supports encrypted folders but beware as these will hit performance very hard. Using the same video clip we watched read and write copy speeds to an encrypted share tumble to only 22MB/sec and 11MB/sec.

One of the closest competitors to the RS411 on price is QNap's TS-419U but this is now looking dated as it has a slower 1.2GHz Marvell processor and is due to be superseded by an updated 1.6GHz TS-419U+ model. A diskless TS-419U costs around 530, but we think the RS411 is a better choice for a small business as it has far more features with superior backup options.

With a diskless model costing less than £500, the RS411 can’t be beaten on price. It does have some limitations as memory can’t be upgraded and it doesn’t support Synology’s expansion units. Costs have been shaved by using a Marvell SoC, but this doesn’t have a huge impact on performance as the appliance posted some respectable times in our real world tests. The new DSM 3.1 firmware also adds some interesting new features and Synology’s backup tools are superior to those offered by most of the competition.