Best business features of the iPad 2

Is the iPad 2 better for business when compared to the original iPad or does it take a backseat? IT PRO investigates. 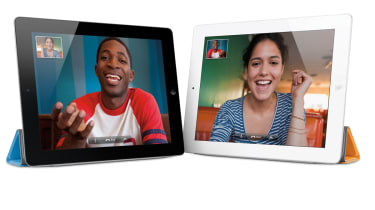 The iPad 2 may have burst onto the tablet scene with as much vigour as the iPad, but does it make sense for business users or is it just a lot of hype designed to get attention?

We take a look at the device's new features and see whether it's worth the upgrade.

One of the major issues with the iPad is that the original had no camera. We have to remember though that tablets aren't designed to have all the bells and whistles of a smartphone and are relatively new on the scene so should be allowed a little time to play catch up.

Following on from the launch of the first generation iPad, other tablet makers launched their own devices, bringing with them cameras. It was just a matter of time before Apple did the same.

As part of the hardware revamp, the Apple iPad 2 will sport a VGA front-facing camera and a 0.7-megapixel snapper around the back.

Although not a massively advantageous feature for business users in the grand scheme of things, the addition of two cameras means the iPad is now equipped for video calls - albeit using FaceTime with other iDevices.

As the iPhone becomes more of a business handset and companies start to roll them out en masse, having the same function on your tablet has got to be a good thing.

The iPad 2 has also enjoyed a significant boost with a 1GHz dual core A5 system-on-a-chip (SoC).

Although Apple is keeping quiet about the specific details of the processor, graphics and precise memory of the iPad 2, what is obvious is the internal workings are better than on the original.

The two cores in the iPad's CPU provide twice the processing power and offer up to 9x faster graphics than the original iPad's processor, making apps whiz along.

Graphics also render faster, making games - if you use the iPad for business and pleasure, that is - smoother than ever.

The iPad 2's CPU still uses the same battery management technique, which, some analysts have suggested, could slow things down a little. That said, this is more likely to a problem when running memory intensive apps, so just something to bear in mind.

Apple's decision to include HDMI was a surprise for many because it's something that might suggest the company is moving towards the mainstream and, once again, taking some of its competitors' products into account.

However, in true Apple style, you'll have to purchase the connector separately. What's more, it uses the iPad's proprietary dock, rather than a conventional mini HDMI port as on other tablets. It does have a dock connector though so you can charge while you're presenting.

The HDMI out allows you to mirror your iPad on a TV in 1080p resolution. This is a perfect addition if you plan to use the iPad in presentations or wish to watch content or demonstrate on a larger display.

The output will allow you to "give a presentation in a conference room on an HD projection screen. And use educational iPad apps to teach an entire classroom. Your friends, co-workers, clients, and students all get an excellent view of your excellent performance," according to Apple.

The iPad 2's 9.7in display is the perfect size for browsing and Safari was certainly a cutting-edge browser when it first appeared on the iPhone four years ago.

Now Apple has tweaked Safari to make pages render faster than ever thanks to speed enhancements when handling Javascript.

Although the browser may be slightly improved, there's still no Flash or extras we'd like to bring it in line with other tablet browsers, such as the tabs that appear on each page of RIM's PlayBook.

One of the biggest changes with the iPad 2 is its vital statistics. Apple has managed to make the iPad 2 a third thinner than the original iPad and claims it is up to 15 per cent lighter.

That also means it's more portable and easier to carry around. Sure, it's a nice little addition, but we're not convinced it'll be the most important feature on a business user's mind when deciding which tablet to go for.

Although UK prices for the iPad 2 haven't yet been announced as yet, we're led to believe it will retail for the same price as the original iPad.

What does this mean? Well, depending on how ground breaking you think the new features are, not much.

The iPad has seen a drop in price of around 100 and this means it's more financially viable to purchase one. Or maybe you should look at an alternative tablet such as the Motorola Xoom (only slightly more expensive than the iPad), or a BlackBerry PlayBook if you're an existing BlackBerry user.

It's much more suited to business use and will probably come in at a comparable price point.

Many have argued that the reason they think an iPad is a good idea over rival tablets is that there's a lot more on offer in terms of applications.

This is certainly true and will continue to be so until other platforms catch up. With only a sprinkling of apps available for other platforms such as the HP TouchPad, BlackBerry PlayBook and Android Honeycomb, Apple is clearly the market leader here.

However, how much will the iPad 2 upgrade mean apps-wise? Not a lot. The only real difference we can expect to see is in the speed at which applications run. This could be a boon for business users for whom time is money.

Although the iPad 2 is being marketed as an upgrade to the iPad, it really adds a load of features that should have been there from the beginning.

The iPad has never really been seen as a core business device. But the iPhone was never brought in to steal BlackBerry's crown - it just did - so could history be about to repeat itself?

The iPad, for example, doesn't have the same security features as the iPhone 4, making it a little less of a suitable option as things said right now.

Many business users have opted for the iPad because it was the first tablet device to appear and brought with it new ways of working on the move.

So the question here is not, is the iPad 2 better for business than the iPad, but does the iPad 2 even make business sense?

If you're considering kitting out your business with tablets, it might be a sensible move to wait until April when the PlayBook and TouchPad are due for release.