The Deskstar 7K3000 is the first 7,200rpm hard disk we've seen with a massive 3TB capacity. However, there are several technical issues which make it less than ideal for mass deployment as Tom Morgan explains. 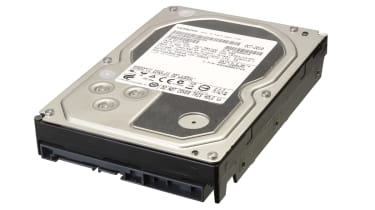 Storing several terabytes of data used to require a multiple hard disk array, but now Hitachi's Deskstar 7K3000 can fit a massive 3TB of data on a single 3.5in disk. Although it's not the first disk to reach this capacity, it is the first with a 7,200rpm spindle speed, which should help improve the speed of file transfers.

The adoption rate of 3TB disks has been slow primarily because they aren't compatible with legacy systems. Device drivers built into older BIOS chips and operating systems can't recognise hard disks with capacities greater than 2.2TB, regardless of how they are partitioned. Unfortunately this includes Windows XP; although other manufacturers have included hardware or software workarounds with their ultra-high capacity disks, Hitachi has opted not to support the older operating system. There are third party tools available that can force compatibility with Windows XP, but the lack of an official solution will surely limit the appeal of the disk for most businesses.

Even when using newer versions of Windows, there are still several constraints to using the Deskstar as a boot disk. Only 64-bit operating systems that support GPT partitioning (i.e. Vista or Windows 7) are natively compatible and you will also need a motherboard with a Unified Extensible Firmware Interface instead of a BIOS. UEFI support is currently limited to Intel's latest Sandy Bridge boards which, due to unforeseen chipset issues, are still difficult to find. This is less of an issue for non-Windows users; both Intel-based Macs and most current Linux distributions can use the Deskstar as a boot disk natively.

In spite of these restrictions, using the disk as a secondary storage drive is very straightforward. On a Windows 7 test machine, it was picked up straight away by the operating system. Setting up the disk using the Master Boot Record (MBR) automatically split it into two partitions to avoid any conflicts with the BIOS; one larger 2TB partition and a second smaller one comprising the remaining capacity. Using GPT partitioning instead, the entire disk can be formatted as a single volume.

It's certainly impressive to find a single disk with a 2.72TB usable capacity, but it's also important that it performs well. Thankfully with its sustained 7,200rpm spindle speed, generous 64MB cache and extra bandwidth provided by SATA3, the Deskstar was exceptionally fast for such a high-capacity disk. It wrote large files at a rapid 104.4MB/s and read them at an even faster 141.6MB/s. As expected, writing a large number of smaller files was slower, but 90.9MB/s write and 100.7MB/s read speeds are still very respectable.

The Deskstar 7K3000 surprised us with its excellent combination of performance and high capacity, as the two are rarely found together. It's also surprisingly well priced, with a per gigabyte price of just 4p. However, it's not without its issues; hardware and operating system limitations make it impractical for use as a boot disk and the lack of Windows XP support will certainly force many users to look elsewhere for a high capacity disk.

With the right combination of hardware and software however, it's still a great way to add extra storage space to a system without requiring multiple disks, or by reducing the number of disks needed to reach a certain capacity in a RAID array.

With its massive capacity and stellar performance, the Deskstar 7K3000 is an ideal secondary storage disk. Unfortunately current limitations make it impractical to use as a boot disk, unless you have very particular hardware or plan on using it in a Mac or Linux machine. Its appeal is also lessened by uncertainty surrounding warranty support following the news of Western Digital's intention to acquire Hitachi.