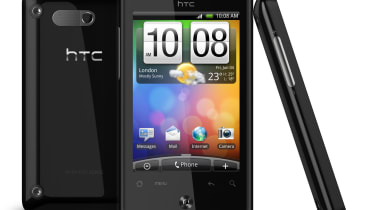 You will need to remove the backplate to get to the microSD card slot and add more storage which you'll need to do if you plan on installing lots of apps or storing lots of documents and photos. The Gratia has a paltry 384MB of internal storage, but after taking into account all the preinstalled apps, only a mere 161MB was available.

Although HTC states on its website that only Android 2.1 is installed on the Gratia, our review unit came with Android 2.2 out of the box.A key advantage of Android 2.2 is the ability to install apps to a SD card where previously they could only be installed to internal memory.

Other advantages of Android 2.2 over the earlier 2.1 include the ability to set up a portable WiFi hotspot as well as support for Exchange calendars and global address lists. HTC has yet to confirm if Android 2.3 will be coming to the Gratia though.

The Gratia's 600MHz Qualcomm processor is some way behind the times. It was good enough for simple tasks like mobile email or rendering web pages, but we suspect it's not capable of streaming online video smoothly. Streaming video from YouTube and iPlayer over a strong WiFi connection was subject to long initial waits for buffering compounded by jerky video and some pauses. Streamed video isn't unwatchable, but the experience is far from exemplary. The relatively weak processor is also unlikely to meet the minimum system requirements for the upcoming 10.2 version of Adobe's Flash Player.