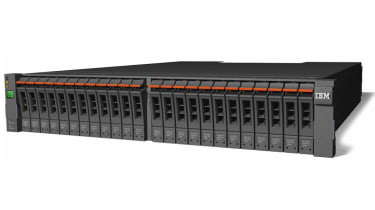 The latest Storwize V7000 appliance represents a big shift in IBM's thinking for its mid-range storage line-up. Up until now it has licensed products from other vendors, such as LSI, and resold them under its own name. The V7000 is one of the first all-IBM appliances and is designed to deliver enterprise level storage features to mid-sized businesses.

Firstly, we should clear up some confusion as, although IBM bought the Storwize company in 2010, the new Storwize V7000 contains nothing from this acquisition other than the name. The original Storwize hardware has now been renamed as the Real Time Compression family and has data reduction features for NAS appliances which the V7000 doesn't support.

What the V7000 does do though, is provide a clustered, storage virtualisation platform that has been designed by IBM to be extremely easy to deploy and use. It includes features such as snapshots, thin provisioning and optional replication and also has the ability to dynamically migrate storage from legacy SANs.

It amalgamates many features from IBM's existing products so, at its foundation, you have the SAN Volume Controller (SVC) software along with the Easy Tier and RAID code from its DS8000 appliances plus a smart web GUI derived from its XIV products.

On review is the V7000 control enclosure with room for 24 2.5in hard disks, although IBM also sells one that supports twelve 3.5in drives. Hard disk choices are extensive as you can pick and choose from SAS, near-line SAS and SSDs.

The enclosure supports a pair of controllers with each providing four 8Gbit/s FC ports plus pairs of Gigabit Ethernet and SAS expansion ports. The latter allows up to nine 12-bay or 24-bay expansion units to be daisy-chained in fault tolerant paths.