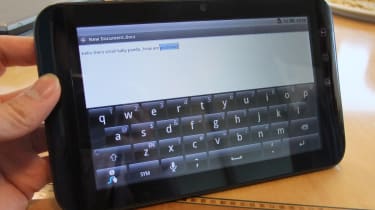 The Streak 7 is Dell's new seven inch Android tablet, a larger version of the existing Streak 5. We've already taken a first look at the Streak 7 when Dell debuted the tablet at this year's CES, but we managed to get more hands-on time with the tablet.

The Streak 7 weighs 450g which is around 150g less than the iPad 2, but slightly heavier than the similarly sized Samsung Galaxy Tab. It's made out of black plastic rather than metal or other exotic materials, but it feels sturdy and well-made. The textured back is easy to hold and doesn't feel like it'll slip out of one's hand.

Unlike most of the other upcoming Android tablets, the Streak 7 doesn't come with Android 3.0 Honeycomb but uses Android 2.2 instead. An upgrade to Honeycomb will eventually be available, but until then Dell has included its Stage user interface on top of Froyo. From our brief preview it's not radically different from the add-on interfaces we've seen on Android smartphones, but it does include a few niceties such as a Recent Apps widget and a combined Facebook-Twitter widget.

Attempting to touch type on the Streak 7 when oriented horizontally was tricky and prone to typos due to the squat, tightly-spaced keys a problem not found on the larger 9.7in iPad 2. Typing was much less troublesome when the screen was oriented vertically where we could thumb type as with a smartphone.

Unfortunately Dell hasn't developed any additional apps, not even a video conferencing app to take advantage of the rear and forward facing cameras. According to Adam Griffin, Dell's Communications Solutions Group Product Manager, the company will introduce cloud-based synching services for sharing content between multiple Streaks and Dell PCs, but was unable to divulge further details.

The touchscreen felt smooth and responsive, no doubt helped by the Tegra dual-core processor. One disappointment is the screen's relatively low resolution of 800x480 pixels which is noticeably less than the 1,024x600 resolution of the Galaxy Tab. We have our concerns about how apps designed for higher resolution Android tablets will run on the Streak 7, if at all. A 16GB SD card will be included which should be enough space for a lot of apps. A HDMI and charging dock will be sold separately which would be useful for giving presentations.

We'll reserve final judgment until the Streak 7 is finally released, which shouldn't be much longer now, but we have our concerns about the outdated operating system and relatively low-resolution screen, especially when it will be facing off against other Android tablets. UK pricing has yet to be confirmed, but it costs $450 in the US, so we'd expect a comparable price over here.

So what are our impressions?

Dell's second attempt at a tablet isn't bad, but it already feels a little out of date even before it's released. It's worth keeping an eye on, but it will face stiff competition from the upcoming onslaught of Android 3.0 tablets.