The Japanese IT giant gives us a sneak peek at its enterprise-oriented tablet that's very different from the iPad 2. 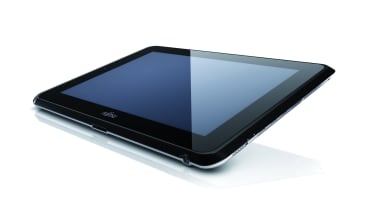 Almost all of the tablets released in the wake of the iPad have been firmly aimed at consumers that enterprises have adapted, with varying degrees of difficulty and success, for business use. Fujitsu is one of the first major companies we know of to design a new tablet designed specifically for businesses.

The oddly-named Stylistic Q550 uses Windows 7 Professional 32-bit but will come with Fujitsu's own touch-optimised user interface on top. Unfortunately the pre-production model we saw had a non-functional touchscreen so we couldn't actually log in and try it out or judge the responsiveness of the touchscreen.

Fujitsu representatives did point out that the screen will have an antiglare finish and can recognise up to four touch points. In contrast, the very glossy iPad screen can recognise ten touch points. A stylus is also included, although there's no where to stow it when not in use as Fujitsu wanted to keep the Stylistic slender. Fujitsu will include its own handwriting recognition software, but if you want to use the onscreen keyboard T9 predictive texting will be enabled to speed up typing.

The Stylistic is indeed slender and the pre-production unit we saw felt well-made and sturdy too. The rubberised rear is supposed to be slip-proof, preventing nasty accidents while out and about. It's a bit heavy at 800g, 200g heavier than the iPad 2, although this can be reduced by 100g if you swap out the four-cell lithium polymer battery for an optional two-cell battery. A replaceable battery is an unusual feature on a modern tablet, but the ability to swap batteries may come in handy if the four-cell battery isn't up to scratch.

The Stylistic will come equipped with Intel's as-yet unreleased Atom Oak Trail processors. These are among the first Atom chips to be designed specifically for tablet rather than netbook use. Fujitsu will pack in either a 30 or 62GB SSD which will support full disk encryption. A fingerprint and smartcard reader will also be built in, accessible from the rear, but a TPM chip will only be included at customer request.

3G and GPS will be built into the Stylistic. If you opt for a cheaper WiFi-only model, you'll still get GPS, but without the benefit of assisted GPS. A full-size USB2 socket and a HDMI port will be built in, while an optional charging cradle will have an extra four USB ports for connecting peripherals.

Fujitsu's Stylistic Q550 is clearly a tablet aimed solely at businesses with few consumer-oriented features. The ability to run existing Windows applications on a tablet will no doubt be attractive to many companies, but depending on the size of your applications and data files the SSD might be too small and it remains to be seen how long the battery lasts and how well the touchscreen and Fujitsu's extra software features work.

We'll be keeping a close eye on the Stylistic Q550 and bring you a full review as soon as we can. The tablet is due to be released by the end of the second quarter this year and will be priced between 749 and 849.