The iPad 2 will finally hit British shores on Friday March 25th at 5pm, but should you upgrade if you already have a first-generation model? Read our head-to-head comparison to find out. 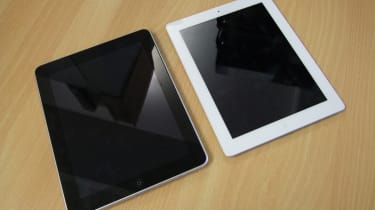 Both the original iPad and the iPad 2 can run the latest version of Apple's iOS, version 4.3. This means owners of both models get features such as Exchange support, a slick and responsive web browser and access to the numerous apps available on the App Store among others.

This also means that the new iPad suffers from the same restrictions as the original, such as an inaccessible file system which makes file transfers more complicated than necessary and a currently limited wireless printing system.

The iPad 2 will be available in configurations with the same amount of non-expandable storage as its predecessor 16GB, 32GB and 64GB. The WiFi-only models will cost 399, 479 and 559 (inc VAT) respectively. 3G-equipped versions of all three will cost 100 more.

Although the iPad 2 is an improvement over the original in many ways, the changes aren't substantial enough to justify upgrading unless you use especially demanding apps or feel burdened by the original model's heavier weight. If you're expanding your fleet of iPads though, it would be a false economy to hunt out remaining units of the original model given the relatively small price difference.