Samsung's black beauty of an ultra-portable laptop is one of the first with an ultra low voltage Sandy Bridge processor, but is it good enough to take on the Apple MacBook Air? Read our full review of this slender new computer to find out. 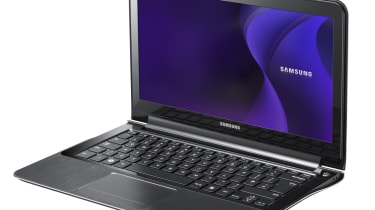 Another useful feature for working in dimly lit conditions is the backlit keyboard. It's a feature we've seen on laptops from other manufacturers, but it's still a welcome feature. The keyboard itself was large and felt comfortable to type on.

The large touchpad felt accurate and responsive. It supports multitouch gestures which felt more responsive than other Windows laptops we've tried, although they're still not quite as fluid as those found in MacOS X. The buttons appear to be built into the pad itself, but you actually have to click quite precisely in the bottom left and right hand corners of the pad. This is quite annoying and makes certain tasks, such as dragging icons, more fiddly than they have to be.

The 128GB SSD has no moving parts, so it shouldn't suffer any damage from knocks or drops. Only 41GB was available for use on our review model though, so you'll need to be conservative about storing large files on it. The SSD is a RAM DIMM-style chip that uses the still uncommon mSATA interface, so replacing it with a larger capacity SSD isn't trivial.

There aren't any business or security-specific hardware features or bundled software. This includes a Kensington security slot an increasingly common omission from incredibly thin laptops. Without you can't tether your laptop to a heavy object to deter thieves, so you'll need to more watchful when out and about with it.

We had high hopes for the Samsung 900X3A, but the ultraportable laptop feels like a Windows version of the flawed original MacBook Air, with its odd design choices and short battery life, rather than the most recent, greatly improved Air. Plus, the 900X3A is about £100 more expensive than Apple's laptop. Despite the 900X3A's faster processor, if you need a thin and light ultraportable laptop that has long battery life and is comfortable to use, the MacBook Air remains our top pick.