HTC's latest high-end Android smartphone is sleek and sturdy, but is this enough to set it apart from the competition? We take a closer look in our review to find out. 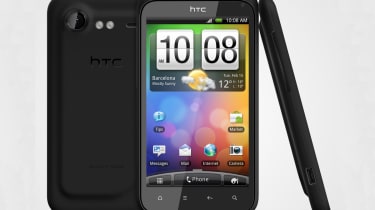 HTC has announced a number of new Android handsets for 2011, and we've already had a good look at one of them, the HTC Gratia. That budget handset was underwhelming, but the pricier Incredible S was much more impressive.

One immediate annoyance is that the HTC Incredible S runs Android 2.2 even though Android 2.3 is already available. Android 2.3 has several features that business users would want, such as an improved copy and paste system, the ability to accept Exchange meeting invitations and built-in support for SIP VoIP accounts. Plus, there are the all important security updates. Although an upgrade to 2.3 has been promised for release in the next few weeks, we'd still expect better for a brand new handset that costs 400 ex VAT SIM free.

Where the HTC Incredible S does sneak ahead a little is with its cameras. There are actually two cameras on board, which is currently unusual for an Android handset. The front facing 1.3 megapixel camera can be used to shoot stills and video, but its main potential lies in video calling. There's no bundled app on the handset though, and not a huge amount of third party support as yet.

The rear mounted eight megapixel camera can record 720p video. Image quality in daylight is acceptable, although skin tones look a little oversaturated. Night time shots are unsurprisingly grainy and a little blurry although the dual LED flash helps to a certain extent. One nice touch is the bundled app that lets you use them as a torch.

Although the Incredible S is slender at under 12mm thick, HTC has still managed to pack in a large four inch screen, although its resolution of 800x480 pixels is the same as other high-end Android handsets. However, if you have small hands you may still find it difficult to reach right across the screen for one handed use.