The first Android 3.0 tablet to reach the UK is also a netbook in disguise. The Eee Pad Transformer could be the iPad 2's first serious rival that's actually available and we take a sneak peek at the WiFi-only model. 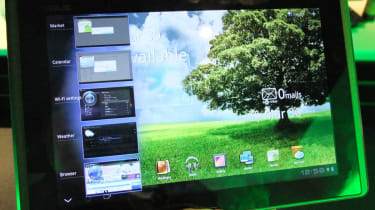 Few of the tablets announced in the wake of the iPad and iPad 2 have the features, design and the low price to challenge Apple's market dominating tablet, but the Asus Eee Pad Transformer could be the first. It not only comes with Google's new tablet operating system, Android 3.0 Honeycomb, but can also turn into a netbook with an optional keyboard dock.

At 680g the Transformer is a bit heavy, so holding it single handed for even short periods of time can be a strain. The plastic casing isn't quite as rigid as the aluminium iPad 2, but it still feels sturdy and well made. The textured rear means it's unlikely to slip out of your hand. The 10.1in screen has a high resolution of 1,280x800 pixels and a 16:9 aspect ratio.

The Transformer is so-named because it can effectively transform into an Android-based netbook when docked with the optional keyboard attachment. It's a netbook-style keyboard but with Android-specific keys, such as Back, Mute and keys for adjusting screen brightness. None of the keys were too small and typing was comfortable. It's tempting to use Windows-style keyboard shortcuts when using the physical keyboard, but these don't work. This is a shame since the iPad recognises Mac-style keyboard shortcuts when paired with a Bluetooth keyboard.

The keyboard dock has two full-size USB2 ports and a full-size SDHC memory card reader which are very useful in addition to the microSDHC and full-size HDMI port present on the Transformer itself. The dock also has an integrated battery which Asus claims boosts the Transformer's battery life from eight hours to 16 hours.

The dock has the same texture and appearance of the Transformer itself. When docked, the tablet and keyboard can fold together like a laptop for easy transport. The chunky hinge, which locks the Transformer into place, makes it feel unevenly weighted though while its combined weight comes in at 1.3kg.