The first Sandy Bridge PC from a major manufacturer is finally here. Kat Orphanides takes a closer look at the Dell Vostro 460 to see if it's a computer worthy of widespread deployment. 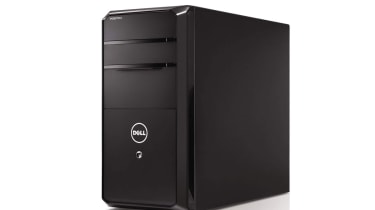 Dell's Vostro PCs are a traditional and safe bet if you're sourcing business systems. Whether you need five or five hundred, there's a certain reassurance that comes with Dell's established reputation and well-regarded warranties. Dell's latest desktop computer is the Vostro 460. Behind its mild-manner exterior, it packs Intel's blisteringly powerful Sandy Bridge Core i5-2500 quad core processor. Its performance in our tests was very fast, with an Overall benchmark score of 172. We don't even own software that needs that much power to work effectively.

The Vostro 460 is a generic little black box - a midi-tower system that will fit comfortably on or under any desk. Its exterior looks unobtrusive, but we weren't too impressed by its internal construction. It's not awful - there aren't any sharp unfinished edges or poorly secured drive cages but we were irritated by the case's tendency to hum in time with the fans. It's an incessant parasitic vibration that appears to be caused by poorly secured components and is at its worst when the PC is on a hard surface such as a desk. Once we'd stopped the incessant buzzing with a bit of carpet to sit the PC on and a heavy object to put on top of it, we were much happier.

There's not much room for expansion. In fact, there's space for only one additional 5.25in drive and one more 3.5in hard disk. However, that's not much of a problem if you don't plan on any major upgrades to your PCs' storage. The motherboard only has two free SATA ports anyway.

The motherboard has three vacant PCI-E x1 slots, perfect for adding USB3 or extra eSATA ports. There aren't any PCI slots, but we can't think of any important cards that are only available with that older connection standard. There's also one PCI-E x16 slot, which is occupied by a 1GB ATI Radeon HD 5450 graphics card. This is essential, as the motherboard lacks support for Sandy Bridge's integrated graphics processing capabilities. Don't expect to be using the Vostro 460 as a 3D graphics workstation without some serious upgrades. The 350W power supply should be enough to power a more capable graphics card.