IBM’s latest System x3755 M3 is its first rack server to support AMD’s Opteron 6100 processors. It’s taken a very long time to materialise and in this exclusive review we tell you whether it’s a better bet than the four-socket AMD servers from HP and Dell. 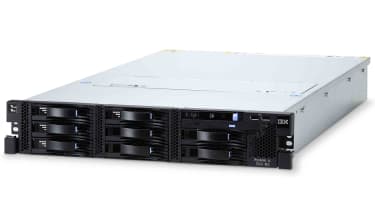 Whereas Dell and HP were quick to see the benefits of AMD's Opteron 6100 server processors it's taken a lot longer for IBM to catch on. Big Blue's first four-socket 6100 server is finally out the door and IBM has granted ITPRO exclusive access to the first review sample in the UK.

The System x3755 M3 uses a 2U chassis so it matches the rack cabinet processing density of Dell's 2U PowerEdge R815. Its low profile also makes it more compact than HP's 4U ProLiant DL585 G7.

IBM has clearly prioritised storage capacity as, unlike Dell's and HP's servers, the x3755 doesn't support 2.5in SFF hard disks. There's room at the front for eight standard 3.5in disks allowing capacity to be pushed to 16TB using 2TB SATA models.

IBM also offers 2TB near-line SAS drives or you can go for 600GB 15k SAS drives if performance is more important than capacity. The server doesn't have an embedded disk controller so our review system came with IBM's base ServeRAID M1015 PCI Express SAS card.

The price of the review system includes four 2.1GHz 12-core Opteron 6172 chips which have a TDP rating of 115W. Memory support is a lot less confusing that that provided by the 5500 and 5600 Xeons as all Opteron 6100s support 1333MHz memory. The server has eight DIMM slots per processor and supports up to 512GB using 16GB RDIMM modules. A 128GB limit applies if you use lower-cost UDIMM memory modules.