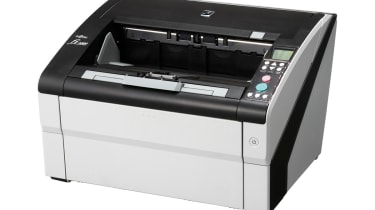 Fujitsu doesn't suggest a minimum specification for the host computer, so we used USB to connect the fi-6800 to a run-of-the-mill Core i3 PC running Windows 7, and conducted our tests using Fujitsu's oddly titled 'ScandAll' software. At the default 300dpi setting, scanning 100 sheets into compressed TIFF files took just 61 seconds; almost exactly the claimed speed. Repeated with a landscape orientation the same test took 53 seconds; an impressive 113ppm, but a little way short of the claimed 130ppm.

We wanted to see whether increasing the scan quality would slow things down, so we disabled hardware image compression and repeated the portrait A4 test in 24-bit colour mode. The fi-6800 shot through our stack of paper at the same rate until roughly the eightieth page, at which point it began to pause momentarily between picking sheets. On investigation we realised that the host computer was struggling to keep up with images of almost 100MB each. This aside, no options appeared to slow the fi-6800 down other than switching to the maximum 600dpi resolution, which halves its engine speed. The physical scanning of duplex jobs was every bit as fast as in simplex, although the host took a few extra seconds to finish processing the additional sides.