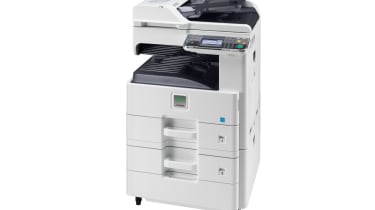 Kyocera-Mita recently announced four new A3 multifunction peripherals (MFPs) for workgroups, of which this is the cheapest. Like the faster FS-6030MFP, the FS-6025MFP prints and copies in mono only, but it can scan in colour at up to 600dpi.

Two further devices, the FS-C8020MFP and FS-C8025MFP, are similar but are based on colour printers. All four belong to the Ecosys family of devices, meaning that in normal use it shouldn't be necessary to replace anything but their toner. In the case of the FS-6025MFP, the drum and developer are guaranteed for three years or 300,000 pages, while the toner is a 15,000-page supply that costs around 70 ex VAT, giving a cost per A4 page of just under 0.5 pence.

There are two versions of the FS-6025MFP and, at the time of writing, some online retailers appeared to have their models, part codes and prices confused. The model reviewed here has the part code 1102L33NL0 and comes with a basic document processor capable of directing output to one of two stacks. The FS-6025MFP/B (part code 1102L33NL1) costs less and goes without.

The FS-6025MFP is necessarily bulky, but it's not too big to sit on a low desk or table. Although it looks good, we've got reservations about its predominantly white plastic, which is likely to get grubby after a couple of years' service. It generally feels sturdy though, with various sliders and openings operating with satisfying clicks and clunks. Only the left-most paper guide in the standard 500-sheet cassette spoils the impression; it's quite flexible and we have doubts whether it's fully up to taming reams of paper for several years.