Windows 7 may be great on a desktop or laptop, but it can be infuriating on a tablet as Alan Lu finds out with the new Acer Iconia Tab W500. 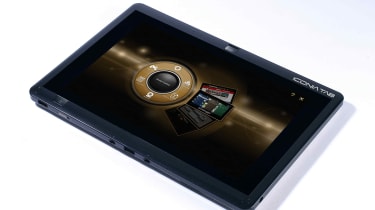 Acer's choice of Windows 7 allows you to use your existing Windows applications, peripherals and deployment and management utilities with the W500. However, Windows 7 is poorly designed for touchscreen use. Icons, menus and other onscreen elements are often too small for fingertip control while the responsiveness of the touchscreen, especially when using multitouch gestures, can be almost unusuably laggy. It's a very frustrating experience.

Acer has attempted to compensate for this with its touch-optimised user interface, Acer Ring. As its name suggests all the controls are organised in a circle. Unfortunately, since it runs on top of Windows, responsiveness is still very poor. Plus many of the applications are actually just standard Windows programs which lack touchscreen-specific interfaces and opening them automatically quits Acer Ring, so when you leave that program you are dumped back onto the standard desktop.

A partial exception is Acer's customised web browser which has large, finger friendly controls. Unfortunately not only is it very slow at rendering web pages, it suffers from the same sluggish touch controls that bedevils the rest of the W500's software.

The only consolation is Microsoft's handwriting recognition which is built into Windows. You can use your finger to write most words, so you don't need a stylus. It's very accurate, with little training needed, so it's a viable alternative to the onscreen keyboard for short bursts of data entry.

For extended text entry Acer sells an optional keyboard dock which connects to a USB2 port on the bottom of the W500. A couple of braces hold the tablet in place, although this means you can't adjust the angle of the screen for more comfortable viewing. Unfortunately the keyboard itself isn't very comfortable to type on. The keys feel springy and don't give enough feedback when pressed, so typos are easy to make. There's a touchstick for controlling the cursor, but the buttons are incredibly stiff making them uncomfortable to use.