IBM’s System x3620 M3 has a sharp focus on storage-intensive applications, but is it a better choice than HP’s versatile ProLiant DL380 G7? Dave Mitchell tests IBM’s latest 2U rack server to find out. 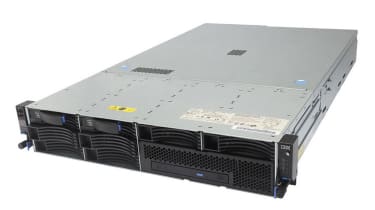 Four fans at the front look after motherboard and hard disk cooling but, unlike the DL380 G7 or Dell's PowerEdge R710, they are not hot-swappable. They aren't so easy to remove either as all fans are mounted in a single tray and individually cabled to a narrow power board tucked down behind the drive bays.

A single expansion cage sits to one side and provides three PCI-E slots. However, don't be fooled by the three mounting points on the backplate as there are only two PCI-E slots behind it. The third slot is located much further back inside the chassis and is only suitable for RAID cards that are internally cabled to the drive backplane.

The x3620 has two embedded Gigabit Ethernet ports but, unlike the x3650, doesn't support IBM's optional dual-port Gigabit daughtercard. Four embedded ports are now a standard feature on nearly all 2U rack servers and are included on HP's DL380 G7, Dell's R710 and even Gateway's budget priced GR380 F1.

The review system came with two 675W hot-plug power supplies, but 460W power supplies are also available. The x3620 proved to be easy on the utility bill as we measured the review system pulling only 135W with Windows Server 2008 R2 in idle. With SiSoft Sandra pounding the pair of 2.27GHz E5507 Xeons this rose to only 214W. We compared this with a PowerEdge R710 equipped with a pair of 2.27GHz E5520 Xeons, 12GB of memory and four hard disks. In idle it drew 150W and peaked under heavy load at 270W.