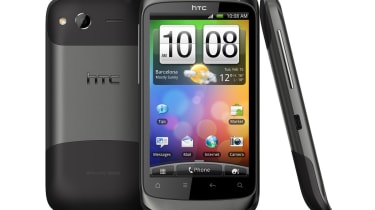 HTC hit the big time with its original Desire handset. The device sold by the truckload, popularised Android within professional circles and proved to be one of the most reliable phones around.

The Desire S, the Desire's Android 2.3-equipped successor, therefore has much to live up to. The plastic chassis of old has been ditched in favour of what HTC calls an "industrial design" aluminium unibody., It feels well-made without adding any additional weight or bulk. However, it doesn't feel quite as classy as the much older HTC Legend due to the creaky-feeling plastic panels surrounding the removable battery and the camera

The Desire S is also slightly lighter and more compact than the original, measuring in at 115 x 59.8 x 11.6 mm and weighting 5g less at 130g. The screen has the same size and resolution as the original's 3.7 inch 480 x 800 pixel display. It looks good enough - as long as you're not expecting iPhone 4 Retina Display levels of clarity and sharpness, you won't be disappointed.

The original Desire's physical navigation keys have been replaced by touch sensitive buttons on the Desire S. We didn't experience any issues with them during testing and while some users may protest the benefits of physical keys over virtual ones, we didn't have any problems with either responsiveness or accidental key presses.

The Desire S, unlike the upcoming batch of smartphones, doesn't have a dual-core processor. Instead, HTC has opted for a 1GHz Qualcomm MSM8255 Snapdragon processor and an Adreno 205 graphics chip, but it still made short work of everything we threw at it.

The fast processor, 768MB of RAM and the speed optimisations of Android 2.3 really do speak for themselves. Using several Android benchmarking apps the Desire S was nearly twice as fast as the original Desire and surpassed both the Nexus S and Samsung Galaxy S.