Sony's slender new Sandy Bridge ultraportable laptop is finally available, packing a powerful processor in a slender design. But can you really have your cake and eat it too? Alan Lu finds out. 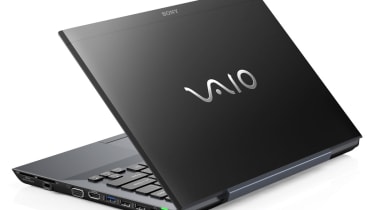 Despite the promise of Intel's new Sandy Bridge processors, technology manufacturers have been slow to release new models equipped with them. Sony has finally released its first Sandy Bridge ultraportable laptop, the Vaio SB1V9E. The name might not roll off the tongue, but it's an impressive laptop in many ways.

The Vaio SB1V9E weighs just 1.7kg even though it has a built-in DVD writer. The magnesium and aluminium black chassis isn't especially eye-catching, but it still looks classy in an understated way. It doesn't feel quite as rigid as other laptops we've seen, flexing under pressure more than we'd like, but it still feels well made.

Typing long documents is accurate and fast thanks to the large, responsive and comfortable keyboard. The keys are backlit for working in darkened rooms, such as airplane cabins and lecture halls. The touchpad is large and generally feels accurate, although the tracking speed felt a little off even at the fastest setting it still felt a little slow. The pad supports multitouch gestures, although they're frustrating to use as there's often a delay in Windows responding to the finger swipes. The buttons are a bit stiffer than we'd like, but work well enough.

Unlike other ultraportable laptops which use ultra low voltage processors, which are energy efficient but comparatively slow, the SB1C5E uses a full-speed Core i5 mobile processor. Paired with 4GB of RAM it sped through our benchmarks, managing a high score of 53 in our new cross-platform applications benchmarks (designed by our sister site Expert Reviews). It's noticeably quicker than older Core 2 Duo-based laptops, but the difference isn't as pronounced when compared to previous generation Core i5 laptops.

The underside of the laptop didn't become uncomfortably warm when it was churning through our demanding benchmarks, but the cooling fan was irritatingly loud. It's especially annoying since the fan kicked in even during seemingly simple, innocuous tasks such as web browsing.