Sangfor is new to the WAN optimisation market and aims to beat the big names soundly on price. In this exclusive review, Dave Mitchell puts the latest mid-range WANACC M5500 appliance through its paces in the lab to see if there are any compromises. 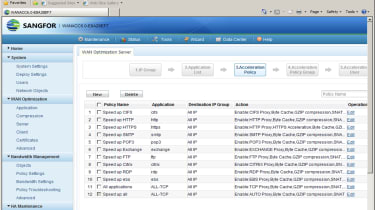 Throwing more bandwidth at the problem is too expensive and the rapid growth and variety of applications being delivered to remote sites and mobile workers will inevitably make this a short-term solution.

WAN optimisation is fast becoming more cost-effective as it allows businesses to do much more with their existing WAN resources. There are a number of established vendors in this market but newcomer Sangfor aims to shake their tree by offering a range of highly affordable WAN optimisation and acceleration solutions.

The M5500 takes the middle ground in a family of eight appliances and can handle up to 6,000 concurrent TCP connections and WAN speeds up to 50Mbps. To put Sangfor's pricing in perspective the equivalent Riverbed appliance is its Steelhead 2050-H, which costs nearly double this.

The M5500 is a 2U rack appliance equipped with four copper Gigabit Ethernet ports which can be used for LAN, WAN and DMZ duties. It also has a couple of SFP ports for longer connections over fibre.

The first pair of copper ports has a hardware bypass switch so if the appliance fails you won't lose your internet connection. Internal storage is handled by a 1TB SATA hard disk. We'd like to see Sangfor add RAID protection for the data cache.

The M5500 functions as a standard transparent TCP proxy that intercepts and optimises all TCP traffic. The feature list includes bandwidth management, protocol optimisation, compression and byte caching plus application proxies, a built in VPN module and an SPI firewall for enhanced site-to-site security.

Another valuable feature is Sangfor's PACC (Portable ACCelerator) software client which provides WAN optimisation for mobile users. This works directly with the WANACC appliances and the base price of the M5500 includes licences for 30 concurrent connections.

The M5500 supports up to 300 mobile users and Sangfor's concurrent user licensing scheme means you only purchase further licenses as and when required. The PACC is also very different to the Riverbed solution which requires a separate Steelhead Mobile controller.

For testing we called up the lab's Network Nightmare configured for a 1Mbps link with 200ms latency. We placed an M5500 appliance on each side and for our head office network we used a Windows Server 2008 R2 system running IIS, FTP and Microsoft Exchange 2007.

At our simulated remote office we used Windows 7 systems loaded with Microsoft Office 2010, Windows Live Mail and the FileZilla FTP client. After completing appliance-to-appliance testing we loaded the PACC client on our hosts and linked them directly to the WAN simulator.

Deployment of the appliances is very swift as you don't need CLI (command line interface) access. For our head office appliance we simply pointed a web browser at its default IP address and fired up the wizard.

This runs through licensing, setting up the network ports and choosing gateway, single arm or bridged operational modes. Network objects that you require traffic to be accelerated for come next and then you add user objects for the remote appliances and PACC clients.

Proxies for TCP, CIFS, HTTP, HTTPS, FTP, POP3, SMTP and MAPI are already preconfigured but you can add others if you wish. Sangfor also provides proxies for popular applications such as Microsoft Exchange, Lotus Notes, Sharepoint, MS-SQL and Oracle.

Policies are used to determine how various traffic types are handled and these can be applied to specific users and groups. Again, Sangfor provides predefined policies but you can choose specific protocols and elect to have byte caching enabled along with LZO or GZIP compression.

For performance testing we used a 10MB Powerpoint presentation. Without optimisation, copying the test file from server to client took 93 seconds. With optimisation activated and a hot cache the same task took just seven seconds.

Retrieving the email from the Exchange server using Live Mail with no optimisation took 228 seconds and with it enabled this only took four seconds for a 57-fold performance improvement. FTP operations also saw big speed boosts with the test file initially retrieved from the server in 89 seconds. With Sangfor in the mix this was reduced to just four seconds.

Remotely opening the file took 103 seconds and saving a modification to the server took 120 seconds. With optimisation in action these times were reduced to 15 seconds and 34 second respectively.

We then removed the remote appliance and loaded the PACC software on our clients. Setup is another swift affair as users only need provide the IP address of the central appliance plus a valid user name and password.

The client uses a local NTFS datacache on the host system which can be from 512MB to 4GB in size. As with the appliance's web interface, you get a running tally of protocols being optimised along with a graph showing how well the software is performing.

Naturally, the local hard disk cache proved to be slightly faster for all tests than the remote appliance with the copy test completed over an optimised link in just three seconds. The email and its attachment also only took three seconds to retrieve for a 76-fold speed boost for our mail operations.

The appliance clearly delivers an impressive WAN acceleration performance for a wide range of applications and is remarkably easy to deploy. When you have products like Sangfor's WANACC M5500 you have to question why many competing WAN optimisation appliances are so much more expensive.