Q&A: Eugene Kaspersky on taking on the big boys

Kaspersky's chief executive tells IT PRO about how his company plans to climb the security ladder, toppling the likes of Symantec and McAfee along the way. 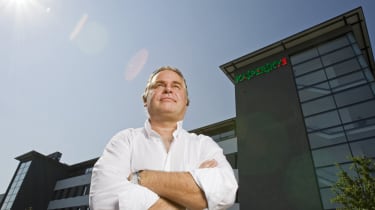 Eugene Kaspersky is one of those people you don't want to miss when he's in town.

In recent, troubling news, the security software firm's chief executive saw his son kidnapped before thankfully being freed. Prior to his personal peril, we managed to catch up with one of the most charismatic people in the security industry at the recent InfoSecurity 2011 conference in London.

From Kaspersky itself and its plans to take on the big players like Symantec and McAfee, to the potential end of desktop computing in the home at least - he certainly had plenty to say.

Kaspersky wants to be one of the top three security companies in the world. How do you plan to achieve this?

I think there will be major changes in the consumer environment because of mobile systems phones, tablets and, maybe, future devices we don't have at the moment.

They are entering the home environment and I think they will replace computers at home because ordinary people they don't really need computers. They need just the web, they need email, they need media editors, they need news and they need social networks.

Cyber criminals are paying more attention to the mobile environment. They have recognised they can earn a lot of money through attacks on mobile devices.

I have not seen the latest data from Apple, but I would not be surprised if its Mac [market] share is decreased and replaced by iPads. There is no need to have heavy machinery.

At the moment, consumer security is mostly computer-based, mostly Windows-based. It will slowly, year-by-year be replaced with mobile security.

Cyber criminals are paying more attention to the mobile environment. They have recognised they can earn a lot of money through attacks on mobile devices.

So the mobile market is where Kaspersky thinks it will make gains over competitors?

We are one of the major players in the mobile market. We understand that mobile security is important.

The first time we had our own booth at the [Mobile World Congress] conference in Barcelona was five years back. For the first two years, people came to us and said "Kaspersky, that's security, it's a mobile exhibition, what are you doing here?"

The third year, they started to come to us and asked questions about mobile security. On the fourth year we signed our first contract with a Middle Eastern telecoms company.

Last February, sometimes there was no space in our booth. Many people came, like mobile operators and manufacturers, mostly [to talk] about Android.

So how do you plan to topple the likes of Symantec and McAfee who have considerably more revenue than other security players, including Kaspersky?

Another answer is, to be number one in mobile security, stay there and wait until mobile devices replace computers.