How green is my data centre?

When Greenpeace criticised cloud for its energy inefficiency, the major players hit back. But can data centres really be green? 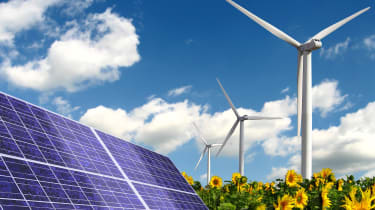 When Greenpeace recently released its report How dirty is your data?', it was touted as "a look at the energy choices that power cloud computing." It was really a look at data centres and their energy efficiency.

Some of the biggest providers of the cloud and IT generally were hit with a damning report card: The cloud isn't just dirty, it's big, black, soot-laden and coal-driven. And the companies behind it big names like Amazon, Apple, Microsoft, Google, Twitter and IBM were not just carpeted for being energy inefficient, they were also criticised for being secretive about their energy use.

Apple in particular was singled out by the mainstream media for a kicking when Greenpeace gave the company a clean energy index rating of just 6.7 per cent by far the worst of the companies analysed, despite it achieving comparatively good (but still bad) ratings for its mitigation strategy and transparency.

Predictably, the IT industry hit back.

Is it right to criticise the cloud, when the data centres it uses would exist anyway out there in the offices and warehouses where the data is created, or nearby in local data centres? Mightn't they even be more efficient? And can't larger companies take advantage of their economies of scale and afford to invest in precisely the kind of research and development which will make data centres more energy efficient? Indeed, aren't some cloud providers and data centres already "going green"?

In response, Google released a statement pointing out the internet and the cloud saved people from needing to travel by car or plane to meetings and was therefore greener than its alternatives.

"However, we also recognise that energy use by data centres is a concern," the company said. "That's why we choose renewable energy suppliers wherever we can... and we apply a shadow price for carbon when buying power for our data centres to encourage cleaner energy use."

"Our researchers and engineers have been working for more than a decade on making our data centres as efficient as possible. In fact, Google data centres are 50 percent more energy-efficient than the industry standard."

Microsoft released a statement pointing out its data centre in Quincy, Washington, used hydropower, and its Dublin, Ireland, data centre was cooled naturally by outside air.

Gary Cook, the lead author of Greenpeace's report, told our sister title Cloud Pro he believed the cloud could indeed play an important role in reducing energy demand elsewhere but the lack of transparency and data on the energy footprint claims of companies like Google and Microsoft made it difficult to assess the claims they were making.

He acknowledged data centre and server design innovation could greatly improve efficiency and reduce overhead energy demand and more in the sector were comfortable sharing best-practice data, but again, transparency was vital to assess the environmental performance claims.

"Planting trees in front of your data centre to make it appear green, is just not going to cut it."

Ali Moinuddin, from data centre service provider Interxion, said being seen to be environmentally responsible was becoming more important, thanks largely to the insistence of customers who want to see green credentials but "without affecting delivery".

"Companies are wise to green wash' and they recognise the need to do business with companies that are energy efficient now and have plans for further improvement," he said.

"Planting trees in front of your data centre to make it appear green, is just not going to cut it. As an organisation we have a commercial interest in being energy efficient and can pass best practice onto our customers."

Interxion works with the Green Grid, of which Moinduddin is the European communications committee co-chair.

"It makes environmental and business sense to evaluate these metrics. The Green Grid has developed the Data Centre Maturity Model (DCMM), which provides clear goals and direction for improving energy efficiency and sustainability across all aspects of the data centre."

Greenpeace points out that despite significant advances in energy efficient design, the significant demand is far outstripping the gains in efficiency.

"Energy efficiency is not enough and the sector must also look at the source of energy supply as well," Cook claims.

In this area, some in the business are well ahead of the game. Eirikur Hrafnsson is chief executive (CEO) of emerging Icelandic cloud provider Greenqloud which is about to use geothermal energy to power its data centre.

"We need to change the energy sources to renewables, it's that simple."

"Of course data centres don't need to be dirty' and in some cases it's a wonder they choose to be when there are plenty of highly available renewable energy locations in the world," he said.

"When big players talk about their greeness' these days all they are saying is that their data centres are now more efficient in cooling IT equipment and therefore losing less energy, hence a smaller electricity bill for them each month. Energy efficiency of data centres and servers cannot keep up with the future energy needs to be effective in reducing carbon dioxide emissions. We need to change the energy sources to renewables, it's that simple."

Greenqloud uses 100 per cent renewable energy drawn from the Icelandic grid, which is 30 per cent geothermal and 70 per cent hydro.

"And we actually record all of our energy use and calculate the energy use and carbon emissions avoided of each cloud user and make that information freely available to them," Hrafnsson said.

That's the kind of transparency that would please Greenpeace and it is the challenge Hrafnsson has set down for cloud providers everywhere.