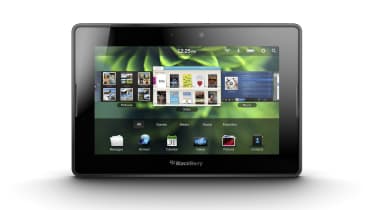 Traditionally a manufacturer business smartphones, it's no surprise RIM is trying to replicate the success of the iPad with its own tablet, the Playbook. It's aimed first and foremost aimed at business users rather than the mixture of business users and consumers we've seen with the most recent BlackBerry smartphones.

Although the PlayBook doesn't have a 3G connection of its own and only connects to Exchange accounts via a company-controlled server, it has impressive security features which will wow even the most sceptical IT department.

At 194x130x10mm and weighing just 425g, the PlayBook is probably the easiest tablet device to fit in a jacket pocket. It's noticeably lighter and smaller than any other modern tablet. Its small size and low weight also make it easier to hold single-handedly.

We weren't overly impressed with the resulting image quality.

The PlayBook's 1,024x600 pixel resolution screen may be small at 7in, but the display is crisp and bright. Even the bezel is an important part of the screen, but we'll come to that later.

At the bottom, there are two ports: a microUSB connector and a MacBook-style magnetic charging port. Both can be used to charge the PlayBook, but only the USB port can be used to transfer files. Unfortunately, RIM has yet to confirm the availability details of the magnetic charger. There's also a mini HDMI port for hooking the PlayBook up to a projector or TV for giving presentations.

There's a rear facing five-megapixel camera and a three-megapixel forward-facing camera on board, but we weren't overly impressed with the resulting image quality. A video conferencing app is included, but it only works with other PlayBooks at present, which isn't surprising as not even the BlackBerry Torch smartphone has a forward-facing camera for video conferencing.

The back of the tablet is coated with a soft-touch rubbery material that looks classy and feels tough RIM hasn't cut any design corners here.

The PlayBook runs on RIM's new BlackBerry Tablet OS based on technology acquired from QNX. After using our review unit for a week, we're impressed. 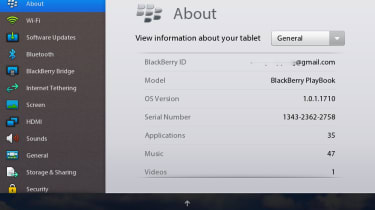 When you first turn the device on, you're guided through a quick and simple set up wizard. This is the first indicator that this device is designed for quick roll out among business users.