The new iMac comes with a number of Intel-made goodies, like Thunderbolt technology and Sandy Bridge processors. 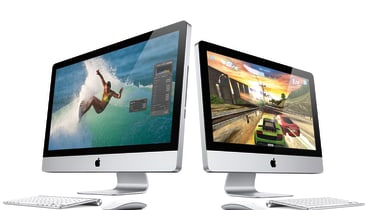 Apple has announced the latest iteration of the iMac, featuring Intel's Thunderbolt technology and a choice of powerful processors.

The Thunderbolt technology will help users connect to high performance peripherals like RAID arrays at theoretical speeds of up to 10Gb/s.

The 21.5in iMac has a single Thunderbolt port, whilst the 27in model comes with two, Apple confirmed.

As for chips, the iMac comes with quad-core Intel Core i5 processors based on the Sandy Bridge architecture.

Users can choose Core i7 processors with up to 3.4 GHz of juice, whilst New AMD Radeon HD graphics processors also feature.

Apple claimed, thanks to these enhancements, the new iMac is up to 70 per cent faster than the previous generation, with three times the performance.

The new iMac retains the aluminum and glass design of its predecessor, as well as a LED-backlit high resolution display and Apple's Magic Mouse.

The desktops are available immediately with prices starting at 999.