Intel's latest SSD is blazingly fast, but it's also expensive. Should you take the plunge and invest in it? Tom Morgan takes a closer look in our review to find out. 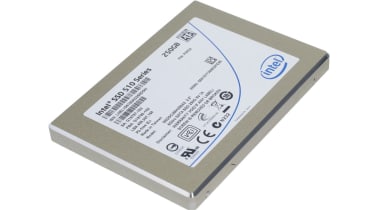 This poor result appears to be a limitation of the memory controller, as it quickly runs out of sequential block access when handling the many hundreds of small files that comprise our benchmark. In most everyday situations however, the 510 series will still be an incredibly fast SSD.

It appears that the 510 series is a return to form for Intel; SATA3 support and a solid memory controller puts it among the fastest SSDs currently available. However, it remains to be seen whether this will last; with the latest SandForce memory controller just around the corner and several manufacturers already demonstrating their upcoming SSDs based around it, Intel may not be able to maintain its performance lead for very long.

The 250GB disk also costs a very high 374 ex. VAT unless you need extremely fast performance right now, it would be better to wait and see what other companies can squeeze out of SandForce in the coming months.

Intel's latest SSD has incredible file transfer performance in almost every situation, although it carries a massive price premium over conventional hard disks. It’s also unlikely that it will look quite so fast against SSDs from other manufacturers due later in the year. Still, if you need extremely fast storage for your SATA3-equipped systems right now, then this is the SSD to get.