Acer's new projector has more features than you can shake a laser pointer at, from 3D to network management, but are these actually of any use to businesses? Jim Martin polishes his glasses for a closer look. 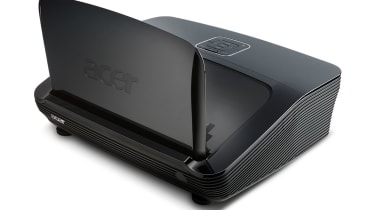 The U5200 is a strange-looking projector by anyone's definition, and wouldn't be out of place on the set of a sci-fi movie. The front tapers to a thin series of vents and there's no visible lens. Instead, there's a large panel which slowly opens when you press the release button on top. It reveals a sunken lens and - on the underside of the panel - a mirror.

The reason for all the drama is the ultra-short-throw nature of the U5200. The mirror allows it to project an 80in image when it's just 6in from the wall. This is ideal for classrooms or any other situation where throw distances are very limited. It also prevents the beam from damaging teachers' eyes, and eliminates the problem of shadows when the teacher or presenter has to stand in the path of the beam.

There's no zoom control, so image size is dictated entirely by the projector's distance from the screen or wall the minimum size of 72in could be a problem in small rooms, or those with low ceilings. It's possible to project onto a non-white wall thanks to colour compensation. The bad news is that the choice of colours covers only pink, light blue, yellow and dark green. This compensation is also supposed to help to counter colour degradation as the projector ages Acer calls this ColorSafe II.

There are several other convenient features including the ability to replace the lamp through the top panel: useful if the projector is mounted on the ceiling. Network management is also possible, and the U5200 is fully compatible with the Crestron Network System for controlling the projector remotely. The administration can power the U5200 on and off as well as scheduling power up and power down times, and configuring email alerts.