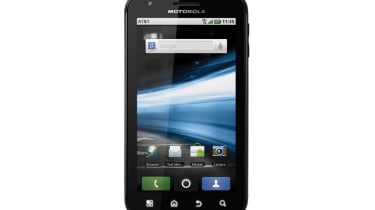 The most unusual thing about the Atrix is its optional Lapdock accessory. It looks like a laptop, but it is incredibly thin since it doesn't have a processor or graphics card of its own it relies on the phone for these essential components. The Atrix plugs into the dock's microUSB and microHDMI ports which are hidden behind a protective flap in a cradle at the rear of the dock behind the screen. The Atrix is securely held in place, but its position means the display can't be tilted back very far, which makes it difficult finding a comfortable viewing angle when it's placed on your lap. 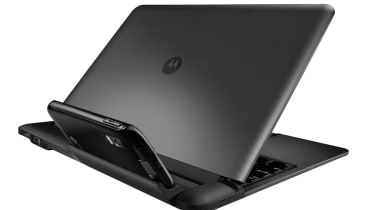 When connected the phone should automatically launch a stripped down version of Linux which is displayed on the Lapdock's 11.6in 1,280x800 pixel screen. This should work instantaneously, although we found it sometimes took a few attempts before the phone recognised the presence of the Lapdock.

Even when docked the Atrix can still be used as a phone, as long as you use the included wired headset or a Bluetooth earpiece. All of your Android apps are available in a small window on your Linux desktop, including the camera/camcorder apps and Google Maps with full GPS capabilities, although controlling touchscreen apps using the Lapdock's keyboard and touchpad is comically awkward. The contents of your phone and any SD cards, as well as any FAT32 disks connected via the dock's two USB2 ports, are available from within the Linux file manager.

The Lapdock's version of Linux is basic since the only available apps are Firefox 3.6, a video and music player program and, most importantly for businesses with Citrix accounts, a Citrix client for connecting to a virtualised Windows desktop. There's also printer support, we had no trouble printing to a HP Postscript Ethernet laser printer, and links to web apps can be added to the Task Bar-style dock. One nice bit of integration between the Lapdock and the Atrix is that any open tabs in the Lapdock's Firefox browser can be restored in your phone's browser using the Webtop connector app on the phone.