Kemp LoadMasters are affordable application delivery controllers for SMBs. Dave Mitchell takes an exclusive look at the new 3600 server load balancing appliance and sees whether its features are as good as its price. 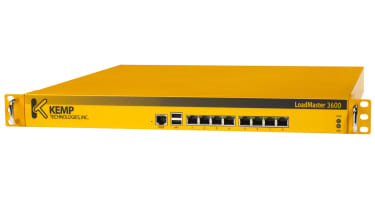 Traffic distribution can be based on real servers with the least number of connections. Weightings can also be applied to further control which servers in the farm are used most. Weighted response time is a new scheduling method where the weights for each server are automatically adjusted based on their response times.

An agent can also be used to allow load balancing to adapt to server performance. The agent presents a numerical value between 1 and 100, which defines how busy the server is, to a LoadMaster query. The only drawback is that each real server must be running IIS, rather than an alternative such as Apache or even if it's not being used as a web server, as the LoadMaster expects a web page containing the value.

Kemp should look at adding load balancing features for VM-based server farms. In our sister title PC Pro we exclusively reviewed Coyote Point's Equalizer E250GX and were impressed with its VLB (virtualisation load balancing) feature which uses parameters such as VM availability and utilisation data to load balance.

For connection persistence the 3600 can use Layer 4 inspection which uses source and destination addresses to ensure traffic from a particular client is always sent to the same physical server. Kemp offers a good range of L7 connection persistence methods which includes cookies, session IDs and URLs along with rules for inspecting HTTP content. 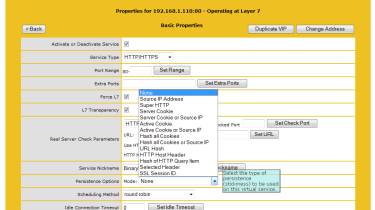 Kemp provides a good range of L4 and L7 persistence controls to ensure users are handled by the same real server during their session.

For SSL acceleration the 3600 uses a Cavium Nitrox hardware accelerator card. Normally, the appliance decrypts SSL traffic and sends it to the internal servers in the clear to improve performance but another new feature allows traffic to be re-encrypted by the appliance before passing it on.

To test the appliance we created a virtual web server with three real servers assigned to it with round robin weighting applied. Using a client system on the external side we pointed a web browser at the virtual IP address and were rewarded with the standard web site we had configured on the real servers.