Consumers will be able to purchase products using Orange and Barclaycard's Quick App, but they will need an NFC-enabled device to do it. 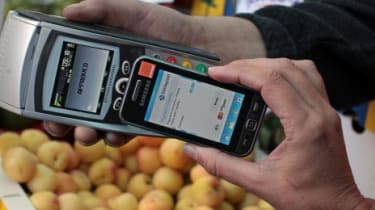 The first contactless mobile payments service has reached the UK, thanks to a partnership between Orange and Barclaycard.

Quick Tap is based on Near Field Communications (NFC) technology, allowing consumers to buy products by touching their mobile phones on readers. However, it will only be valid for purchases of 15 or under.

The mobile app will be usable in over 50,000 stores which accept contactless payments, including McDonalds, Pret a Manger and Wembley Arena.

Users with an NFC enabled device can transfer up to 100 over to the app, as long as they have Orange and Barclaycard accounts.

It's going to start a revolution in the way we pay for things on the high street.

"This is the first time that customers can use their mobile to pay for goods and services in shops across the UK, rather than using cards or cash," Chan said.

"They'll be able to do this, safe in the knowledge that this is a secure technology brought to them by the biggest names in payments and mobile technology."

Users are able to enter a PIN on their handset before each transaction, whilst the fact mobile payments are processed online ensures no transactions can be completed if a customer cancels their phone.

Electronic statements will also be stored within the app, detailing Quick Tap purchases.

"Orange Quick Tap is the first of its kind; a service that allows you to pay for everyday items just by tapping your phone wherever you see the contactless payment symbol," said Orange vice president Pippa Dunn.

"It's going to start a revolution in the way we pay for things on the high street."

Orange has become the first communications provider to offer a mobile wallet in the UK, beating competitors like O2, which announced plans for a contactless payments service in February.

The nascent market looks set for take-off, given the excitement surrounding the technology.

A YouGov survey, conducted on behalf of Intelligent Environments, discovered 42 per cent of smartphone users wanted to use their mobiles to shop.

iPhone users were found to be the most keen to use their phone as a wallet, with 56 per cent wanting the service.

"This initiative by Orange is the tip of the iceberg coming into view the technology exists now to really change the way we live from ordering travel tickets to collecting benefits and even taking out library books, it can all happen from the same chip in your mobile phone," said David Burdett, managing director of payment technology firm Ecebs.

"The really exciting aspect of this launch is not what can happen now, but what it will lead to in the near future. The danger is that we focus on the tip of the iceberg, and ignore what's lurking under the surface."