We take a sneak peek at Lenovo's new super slender ThinkPad X1 ultraportable laptop to see whether it can rival the MacBook Air. 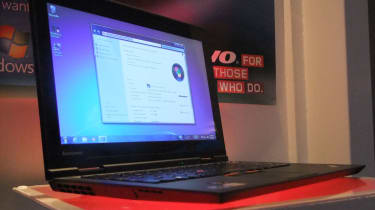 No matter what you think about Apple and its MacOS X operating system, that company's influence on computer design is undeniable. Lenovo's sleek and slender new ultraportable ThinkPad laptop, the X1, may look unchanged from older classic ThinkPads but some Apple-esque details have been incorporated into its design.

The X1 may look unchanged from older classic ThinkPads but some Apple-esque details have been incorporated into its design.

Lenovo claims the X1 is just 16mm thick and weighs just 1.7kg, achieved in part by the absence of an optical drive. Although it's certainly very thin, it feels heavier than 1.7kg due to its uneven weight distribution much of the heft seems to have been shifted towards the rear of the laptop. Like an increasing number of laptops the battery is sealed and isn't designed to be user-replaceable. External batteries that snap into a bottom-mounted port will be available, but will also add to the weight.

Although slender, the base of the X1 felt rigid and sturdy, but the screen flexed under pressure far more than we'd like. The 13in screen looks far brighter than previous Lenovo displays. This is at least partially due to the glossy finish which may dismay office workers who prefer matte anti-glare screens. We'll have to wait for a finished production unit to judge just how reflective the screen is in ITPRO's own fluorescent-lit offices.

The screen has a resolution of 1,366 x 768 pixels, but we were hoping for a 1,440x900 pixel option which was available on the older ThinkPad X301 and is currently available on the MacBook Air. Higher resolution screens make multitasking and working on larger documents much easier.