If you thought Intel's Atom was only good for netbooks and NAS appliances then think again. Dave Mitchell reviews Boston's Green Power 2200-T to see how it's used these processors to squeeze eight independent server nodes into a 2U rack chassis. 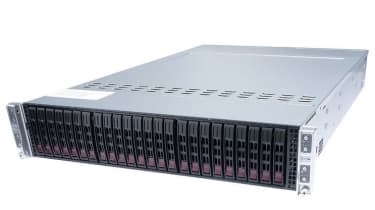 Many businesses don't use demanding applications. Consequently, they see little point in investing in servers using the latest multi-core Xeon and Opteron processors when most of their computing power will remain untapped.

Boston's Green Power 2200-T is designed for such businesses. It's a low cost, high-density system for running basic applications such as web serving and hosting, mail and BlackBerry services. It uses Intel's Atom processor and brings together eight, independent server nodes into a 2U chassis.

The 2200-T is based on Supermicro's Twin Cubed server platform which consists of a 2U rack chassis and four hot-swap trays each using an X7SPT-DF-D525 motherboard. The motherboards have two embedded 1.8GHz Intel Atom D525 dual-core processors and are designed to present each processor as a totally separate server. 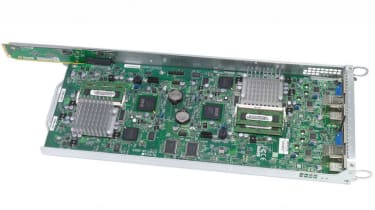 The chassis has two hot-swap 720W 80 Gold Plus certified power supplies and both are cabled through to the hard disk backplane at the front. The motherboard interfaces are hard-wired though to a hot-plug bridge bar on the side of the tray which mates with the chassis backplane during insertion allowing it to receive power and hard disk storage from a single connector.

The chassis provides a total of 24 hot-swap SFF hard disks so each node gets three drives apiece and the price includes two 500GB disks per node. The motherboard's embedded Intel SATA controller supports mirrors, stripes and RAID-5 so storage redundancy per node is good.

A glance at the rear of each tray shows a complete set of ports for each server node comprising VGA, two Gigabit Ethernet and two USB2 ports. Further expansion isn't possible as the motherboards don't have any PCI Express slots or room for a mounting bracket on their rear panel.

A drawback of using Atom chips is their memory limitations as the motherboards only have two SO-DIMM slots for each node. The Atom's maximum supported memory is 4GB of 800MHz DDR3 and this is also the unbuffered, non-ECC variety so we wouldn't recommend using this server to run mission-critical applications.