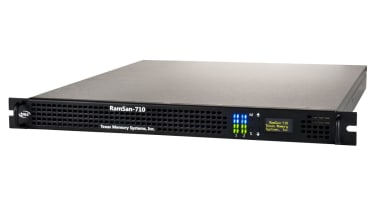 The RamSan-710 can use up to 5TB of Toshiba 32nm SLC flash storage. Wear-levelling helps prolong the life of the flash chips, while on-board RAID protection helps prevent data loss caused by hardware failure.

There are also on-board batteries to ensure an orderly shut down in the event of a power loss.

TMS claims the RamSan-710 has an expected lifespan of 10 years, thanks to its Series 7 Flash Controller, which is based around a PowerPC processor.

TMS claims file transfer speeds of 5GBps since the RamSan-710 has four 8Gb Fibre Channel ports, as well as QDR InfiniBand ports for connecting to your SAN. TMS also said the RamSan-710 could write 270,000 IOPS, although the company didn't state whether this figure was for sequential or random writes.

Building a storage array around expensive flash storage may seem like a luxury, but Mark Peters, senior analyst at the Enterprise Strategy Group, thinks otherwise.

"Flash storage is no longer just a tool for those in the rarified IT atmosphere, but is rapidly becoming a standard real-world enabler of both better performance and improved economics," he said.

The RamSan-710 should be ready for delivery to customers in four to eight weeks.