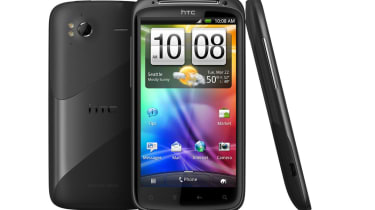 Motorola Atrix. This isn't a huge step up from the Galaxy S II's 480 x 800, and nor is its nominal 256 pixels per inch quite the same as the iPhone 4 Retina display's 326ppi, but it does still make for a sharper image and small text is that much more legible as a result.

Second, the Sensation uses Super LCD technology rather than Samsung's dazzling Super AMOLED, but the difference in display quality isn't too pronounced. Colours don't zing in quite the same way and the contrast isn't as dramatic, but it's still a great screen, with a bright and vibrant image.

Since it uses the same Android 2.3.3 operating system, there's little functional difference between the Sensation and Galaxy S II, but HTC has made quite a few tweaks of its own. The biggest of these is the Sense skin that supplants Android's usual UI, but it works in much the same way it's just much better looking. 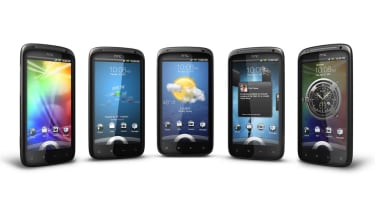 A view of the customised lock screen on the Sensation

Sense does add a few useful features of its own though, the most obvious being the lock screen. This has customisable shortcuts for quick access to four apps, plus an optional live' wallpaper that can display a weather forecast, Twitter feed, and so on. The seven Android Home' screens can contain the usual mix of widgets, app shortcuts too, each accessed by scrolling from side to side, but Sense also adds a zoomed-out overview of all them that's accessed with a double-tap of the Home button.