With an updated Marvell memory controller on-board, Crucial’s M4 looks to be the fastest SSD the company has ever produced. Tom Morgan takes a look to see how it compares to the competition. 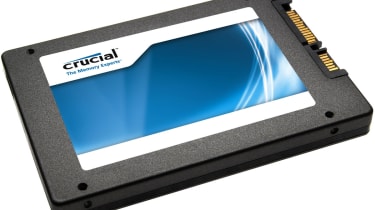 If you were in the market for an SSD last year, there's a good chance you would have considered a Crucial RealSSD C300; it produced incredibly fast transfer rates thanks to a competent Marvell memory controller and thrashed most of the competition with its fast SATA III connection. The company lost ground to other manufacturers that used the impressively fast SandForce controller, but is hoping to reverse this trend with the M4.

Our file transfer tests proved that the updated memory controller has made a big difference.

The M4 includes some much-needed optimisations that should help boost performance. The all-important memory controller might be the same one that Intel uses in its 510-series SSDs, but a newer revision and custom firmware should set the two disks apart. The real change has been the shift to 25nm NAND flash memory. This should not only bring a slight performance boost, but lower manufacturing costs too which will helpfully lead to lower prices.

We weren't expecting a huge performance gap between the older C300 and newer M4, but our file transfer tests proved that the updated memory controller has made a big difference. In our SATA III-equipped test system, the M4 managed an impressive 252.8MB/s write and huge 319MB/s read when handling large files, which is significantly faster than its predecessor. Small file writes were equally fast at 171.9MB/s, but as we've come to expect from SSDs the small file read test was a struggle. A low 48.3MB/s score dragged down the overall result, but performance was still significantly better than the equivalent C300. In everyday use, we could load Windows in 13 seconds, a whole 43 seconds faster than we could using a mechanical hard disk.