HTC's first Android tablet is not only smaller and lighter than the iPad 2, it can be used with a pressure-sensitive stylus too. The Flyer didn't soar high in Julian Prokaza's affections though - read on to find out why. 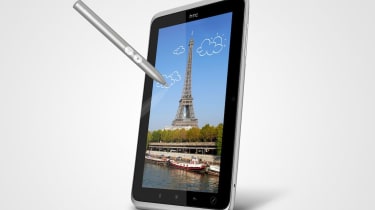 HTC Flyer Magic Pen ST D500 is an optional extra, but the lack of a silo on the Flyer for storage when it isn't in use, not to mention the 48 price tag, leads us to suspect it won't be a popular option.

The stylus, which is powered by a single AAA battery, is about the size and shape of a ballpoint pen and the large plastic tip works well on the glass screen. Usefully, the stylus can be used anywhere in Android, where a tap on the screen triggers an instant screenshot that can then be scribbled on, making it perfect for annotating everything from web pages to photos.

There's also a dedicated Notes app (courtesy of Evernote) that can mix typed text and scribbles for more flexible note taking. A stylus tap on the dedicated button at the bottom right of the screen also pops out a menu with the usual selection of pen styles, colours and thicknesses.

We've used scribble' rather than write' when it comes to describing how the stylus works with the HTC Flyer, and for good reason. Although the set-up works well enough for drawing, stylus input just isn't responsive enough for handwritten notes. Write quickly and the result is an illegible scrawl; write slowly and the lag between the stylus tip and the line following it is too large for anything more than the odd few words. More annoying is the fact that the stylus can only be used for writing and won't work with any other part of the Android UI, so a fingertip is still needed to press on-screen buttons.

More artistically-inclined users will be interested to hear that the stylus is pressure-sensitive, but it doesn't seem to have many levels of sensitivity as far we could tell. We were only only able to get three thicknesses of brush with varying pressure.