Thecus' latest N16000 NAS appliance combines support for 6Gbit/s SAS drives and high performance networking. Dave Mitchell plugs it into his 10-Gigabit Ethernet network and takes it for a high-speed test drive so read this UK exclusive review to see how it fared. 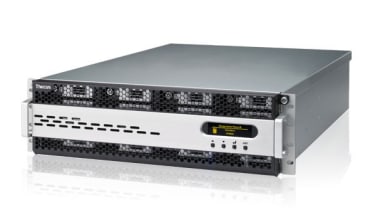 The N16000 runs the same firmware as all current Thecus NAS appliances so the majority of features are consistent across the entire family. Installation using the Setup Wizard is a swift process and for testing we configured six Seagate Cheetah 6Gbit/s SAS disks as a RAID-5 array which took a couple of hours to build. 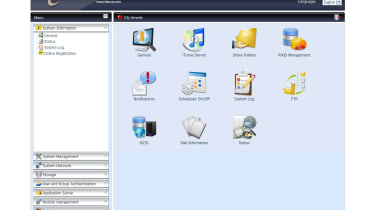 The hard disks are only used for storage but fault tolerance extends to the operating system as this is protected by Thecus' dual-DOMs. The second module maintains a backup copy which is called up if the primary one fails and from the web console you can schedule regular backups.

For 10-Gigabit Ethernet testing we moved over to a dual Opteron 4170 HE Dell PowerEdge R515 fitted with a single port Intel 10GBase-SR card. With a direct fibre connection to the appliance we saw Iometer return a storming raw read speed of 680MB/s for a mapped share.

This translated to a massive boost for drag and drop copies with the same tests now returning average read and write speeds of around 470MB/s. Most businesses will more than likely connect the appliance to a switch over 10-Gigabit and use it to link multiple servers over Gigabit and we can confirm that the N16000 is quite capable of handling these demands.