As ISPs squabble over infrastructure pricing and uncertainty surrounding demand, fibre broadband rollout in the UK could be in jeopardy. Tom Brewster investigates... 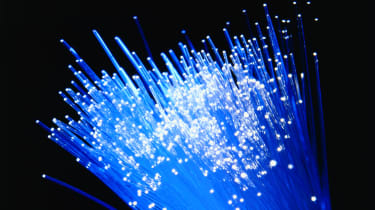 Fibre broadband is spreading rapidly across the UK, but all is not as rosy as it seems.

In reality, the rollout of superfast connections to the majority of the nation is in jeopardy.

Both Government and industry have made solid commitments, yet a number of potential pitfalls could make the road to fibre a rocky one.

Culture secretary Jeremy Hunt plans to make the UK the top broadband nation in Europe. Yet those plans might fall into disarray thanks to industry squabbling over infrastructure and uncertainty surrounding actual enthusiasm for fibre.

The Government believes the UK will be the best-connected nation in Europe by 2015, so deadlines are looming. If they are to be met, the great fibre debate needs to spawn genuine progress and fast.

Looking at the history of fibre in the UK, it's clear this country hasn't always been the most forward-thinking nation. The case for next-generation connections was made as far back as the 1980s, during Margaret Thatcher's reign as Prime Minister.

When BT proposed the case for fibre then, Thatcher snubbed the telecoms giant. Amongst other concerns, she cited anxieties over a lack of competition in the market a theme which still resonates today.

Over the following decades, South Korea, Japan and European nations like Sweden rolled out their own fibre networks, whilst the UK floundered. It has only been in the past two to three years that this nation has truly got a grip on fibre.

Rollouts are now progressing at breakneck speeds, however. BT and Virgin are the two major players here.

BT has staked its claim on the fibre landscape with a massive 2.5 billion investment on infrastructure to cover two-thirds of the UK by 2015.

Last month, BT said it was bringing connections to an extra 80,000 additional premises every week, in one of the fastest rollouts in the world. It also has plans to almost double the speed of its fibre-to-the-cabinet (FTTC) based service in 2012.

Virgin is investing in a fibre optic network it hopes will pass close to 85 per cent of all UK businesses. The company has started offering 100Mbps services over its fibre network which spans 186,000 km.

These "ultrafast" connections can now be accessed by over 100 towns across the UK. Virgin's also been trying out some 200Mbps services, posing itself as the Speedy Gonzales of the nation's ISPs, quite literally.

As for the so-called "final third" those remote parts of the UK which haven't been guaranteed fibre access some headway is being made.

Fujitsu is planning a fibre-to-the-home (FTTH) network to provide for a further five million rural homes, in a project which has already attracted Virgin Media and TalkTalk.

The Government is firmly on board too, allocating 830 million from its BDUK fund to help bring services to remote areas. The Coalition plans to have 90 per cent of all homes and businesses connected to speeds of at least 25Mbps by 2015, whether via fibre or not.

All of the above might lead you to believe the UK is set to become a true world leader in broadband. Sadly, you would be mistaken.